READ IT! - Introduction to Lamentations 1-4

The Book of Lamentations is a collection of poetic laments for the destruction of Jerusalem. In the Hebrew Bible it appears in the Ketuvim ("Writings"), beside the Song of Songs, Book of Ruth, Ecclesiastes and the Book of Esther (the Megilloth or "Five Scrolls"), although there is no set order; in the Christian Old Testament it follows the Book of Jeremiah, as the prophet Jeremiah is its traditional author. The book is partly a traditional "city lament" mourning the desertion of the city by God, its destruction, and the ultimate return of the divinity, and partly a funeral dirge in which the bereaved bewails and addresses the dead. The tone is bleak: God does not speak, the degree of suffering is presented as undeserved, and expectations of future redemption are minimal.

The book consists of five separate poems. The first four are written as acrostics – chapters 1, 2, and 4 each have 22 verses, corresponding to the 22 letters of the Hebrew alphabet, the first lines beginning with the first letter of the alphabet, the second with the second letter, and so on. Chapter 3 has 66 verses, so that each letter begins three lines, and the fifth poem is not acrostic but still has 22 lines.

Lamentations has traditionally been ascribed to Jeremiah, probably on the grounds of the reference in 2 Chronicles 35:25 to the prophet composing a lament on the death of King Josiah, but there is no reference to Josiah in the book and no reason to connect it to Jeremiah. The language fits an Exilic date (586–520 BC), and the poems probably originated from Judeans who remained in the land. Scholars are divided over whether they are the work of one or multiple authors. One clue pointing to multiple authors is that the gender and situation of the first-person witness changes – the narration is feminine in the first and second lamentation, and masculine in the third, while the fourth and fifth are eyewitness reports of Jerusalem's destruction; conversely, the similarities of style, vocabulary, and theological outlook, as well as the uniform historical setting, are arguments for one author.

In the first chapter, the city sits as a desolate weeping widow overcome with miseries.

“How lonely sits the city! Judah has gone into exile. O LORD, I am despised. Is any sorrow like mine? There is no one to comfort me.”

In Chapter 2 these miseries are described in connection with national sins and acts of God.

“The LORD has not pitied Jacob. He has abandoned his sanctuary. My eyes fail with tears. Young and old lie slaughtered in the streets.”

Chapter 3 speaks of hope for the people of God: the chastisement would only be for their good; a better day would dawn for them.

“I remember my affliction and my wandering,
the bitterness and the gall.
I well remember them,
and my soul is downcast within me.
Yet this I call to mind
and therefore I have hope:
Because of the Lord’s great love we are not consumed,
for his compassions never fail.
They are new every morning;
great is your faithfulness.”

“The Lord is good to those whose hope is in him,
to the one who seeks him;
it is good to wait quietly
for the salvation of the Lord.
It is good for a man to bear the yoke
while he is young.”

“For no one is cast off
by the Lord forever.
Though he brings grief, he will show compassion,
so great is his unfailing love.
For he does not willingly bring affliction
or grief to anyone.”

Chapter 4 laments the ruin and desolation of the city and temple, but traces it to the people's sins.

“Those who once ate delicacies
are destitute in the streets.
Those brought up in royal purple
now lie on ash heaps.
The punishment of my people
is greater than that of Sodom,
which was overthrown in a moment
without a hand turned to help her.”

“Those killed by the sword are better off
than those who die of famine;
racked with hunger, they waste away
for lack of food from the field.
With their own hands compassionate women
have cooked their own children,
who became their food
when my people were destroyed.”

“But it happened because of the sins of her prophets
and the iniquities of her priests,
who shed within her
the blood of the righteous.” 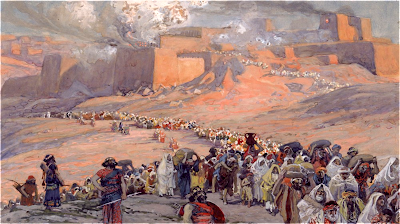 After reading about how Babylon destroyed Egypt, Philistia, Moab, Ammon, Edom, Damascus, Kedar, Hazor, and Elam, we read that Babylon will one day be destroyed as well. Jeremiah’s scroll of judgment against Babylon is symbolically tied up and thrown into the river.

The end of the book contains an historical appendix revisiting the Fall of Jerusalem. Jeremiah closed his book with a final reminder of the horrors of Jerusalem’s fall. This chapter closely parallels chapter 39, but gives more detail about what happened afterwards.

As 2nd Kings 25 also records, when Awel-Marduk succeeded Nebuchadnezzar as King of Babylon, he set the captive king Jehoiachin free and treated him like a prince. Babylonian cuneiform records have even confirmed Jehoiachin’s regular food ration from the royal table. 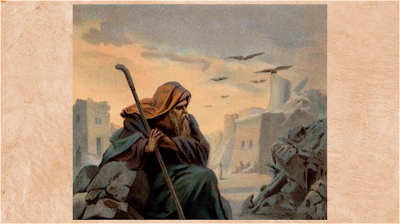 Chapters 39–44 describe the Fall of Jerusalem and other related events. The Babylonians destroyed Jerusalem. They killed Zedekiah’s sons and poked out his eyes. The Babylonians freed and protected Jeremiah. They liked how he had prophesied against his own people. Nebuchadnezzar appointed Gedaliah as governor over Judah, but he was assassinated by the people after a short time. The few who remained in Judah were afraid of Nebuchadnezzar’s wrath and fled to Egypt against Jeremiah’s warning. They dragged Jeremiah along with them. Jeremiah prophesied that Nebuchadnezzar would soon also destroy Egypt and told the people to turn to Yahweh. They instead worshiped “The Queen of Heaven” and told Jeremiah to shut up.

Jeremiah sends a message to his scribe Baruch:

“This is what the Lord, the God of Israel, says to you, Baruch: You said, ‘Woe to me! The Lord has added sorrow to my pain; I am worn out with groaning and find no rest.’ But the Lord has told me to say to you, ‘This is what the Lord says: I will overthrow what I have built and uproot what I have planted, throughout the earth. Should you then seek great things for yourself? Do not seek them. For I will bring disaster on all people, declares the Lord, but wherever you go I will let you escape with your life.’”

Chapters 46-51 are made up of oracles against the nations. God’s judgment extends to all nations and not just to the people of Judah.

God told Jeremiah to prepare a scroll that contained all of his prophecies. Jeremiah dictated the words to Baruch, his scribe, who carefully copied them. Baruch took the scroll and had it tread to Jehoiakim and Judah’s officials. Jehoiakim cut out the parts he didn’t like and threw them in the fire. He tried to arrest Jeremiah and Baruch, but they managed to hide and escape. Jeremiah prepared another scroll as a testimony to that generation and to future generations.

When Egypt’s army invaded the land to stop the Babylonians’ advance, the Babylonian army temporarily lifted the siege from Jerusalem. Zedekiah requested Jeremiah’s prayers for the city, but Jeremiah said once the Egyptians left, Nebuchadnezzar would return. When Jeremiah tried to go to Benjamin on business, he was accused of desertion and arrested. Later, Zedekiah summoned him and asked for a message from God. Jeremiah said Babylon would soon take Judah captive. He also complained about having been kept in prison. Zedekiah put Jeremiah in the guard’s courtyard and made sure he was fed every day.

Jeremiah preached to the soldiers in the courtyard, and they threw him in a cistern. A Cushite eunuch named Ebed-Melek and 30 other men rescued him and he remained in the courtyard of the guard.

Zedekiah was nervous and secretly met with Jeremiah. Jeremiah told him to surrender to Nebuchadnezzar and he’d be better off, but Zedekiah was too afraid. 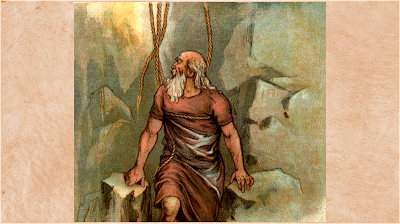 Chapters 39–44 describes the Fall of Jerusalem and other related events. The Babylonians destroyed Jerusalem. They killed Zedekiah’s sons and poked out his eyes. The Babylonians freed and protected Jeremiah. They liked how he had prophesied against his own people. Nebuchadnezzar appointed Gedaliah as governor over Judah, but he was assassinated by the people after a short time. The few who remained in Judah were afraid of Nebuchadnezzar’s wrath and fled to Egypt against Jeremiah’s warning. They dragged Jeremiah along with them. Jeremiah prophesied that Nebuchadnezzar would soon also destroy Egypt and told the people to turn to Yahweh. They instead worshiped “The Queen of Heaven” and told Jeremiah to shut up.

Chapter 29 contains a letter that Jeremiah wrote to the people who were exiled by Babylon. Jeremiah told the exiles to settle down and raise families in Babylon because their rescue was far-off. But a guy named Shemaiah told the people they would be delivered very soon and tried to have “that maniac” Jeremiah arrested. God said he would punish Shemaiah for prophesying lies.

The next section of the book is made up of oracles of hope. First, we hear about the restoration of Israel. God promised to restore His people from captivity. God promised to plunder the nations who had plundered His people. God promised to restore David’s line. God would turn the mourning and suffering of His people into joy and celebration. Jeremiah also reported that God was making a new covenant with His people. Moses wrote the old covenant on scrolls and stone tablets, and as the people read it, they knew what God expected. But in the new covenant, God would place his law in His people’s hearts to a level He had not done in previous times, and God’s Spirit would guide their lives from within them in a deep, new way. 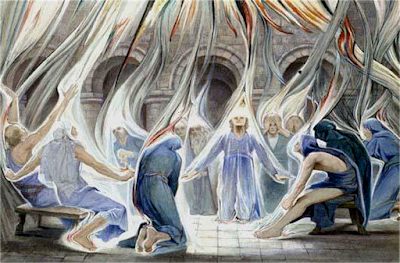 As Jerusalem was under siege, God told Jeremiah to buy a field from his cousin Hanamel. God intended Jeremiah’s land purchase to be a sign of hope. One day, Judean land would again have value and God’s people would return and claim it. God offers a promise of restoration:

Chapters 34-45 are made up of historical and biographical accounts. First, we read Jeremiah’s teaching on Covenant Faithfulness. First, he addressed the issue of freedom for slaves. As Nebuchadnezzar’s siege began, Zedekiah initiated a half-hearted attempt to win God’s favor by releasing all Hebrew slaves in accordance with the Mosaic Law, but the people soon reversed the king’s decree and took back their slaves. God was displeased and said He would “release” His people to sword, pestilence, and famine.