READ IT! - Introduction to Leviticus 8-13

After all these laws about offerings, we then get a short little story about the anointing of Aaron and his sons.

God chose Aaron and his sons – Nadab and Abihu – to be priests. They were to be God’s representatives for the people. However, shortly after they became priests, Nadab and Abihu went into the Tabernacle and offered “unauthorized fire” to the LORD. And Fire came out from the LORD and consumed them.

The text says that the priests were not allowed to mourn for those whom “the LORD had destroyed by fire;” only normal people could mourn for them. After this tragedy, Moses presents some new laws about alcohol and priests... perhaps implying that what happened here was that Nadab and Abihu got drunk on the job and fell into God's fire...

After that pleasant little story… we get to hear all about kosher laws and what are considered to be “clean” and “unclean foods.”

But you shouldn’t be eating…

But not okay to eat…

But it’s not okay to eat…

We then get into “Laws of Sanitation,” such as “purification after childbirth,” where we learn that having a child makes you sanitarily “unclean,” not sinfully “unclean.”

We also get some wonderful regulations about “defiling molds,” where we learn that moldy things are sanitarily “unclean,” but not sinfully “unclean.”

Does the cloth have green or red mold?
And is the mold spreading?
And if it is… burn it!
Also… don’t forget to wash your clothes.

READ IT! - Introduction to Leviticus 1-7 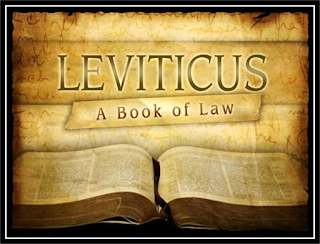 The Book of Leviticus continues the stipulations laid out in the covenant made between God and His people at Mount Sinai.

The name “Leviticus” refers to the tribe of the Levites, who were given special commands to follow as a part of the Sinai Covenant.

The Levites became Israel’s priests and were entrusted with the task of offering different atoning sacrifices to God on behalf of the people as well as making sure the people followed the Law.

It's important to remember that these Laws are specific commands to specific people in a specific time period. In the New Testament, the Jewish Christians stated that God did not want everyone everywhere to follow every rule in The Law. In regard to The Law, this is what the early Jewish Church leaders wrote to the early Gentile believers in the Book of Acts:

"It seemed good to the Holy Spirit and to us not to burden you with anything beyond the following requirements: You are to abstain from food sacrificed to idols, from blood, from the meat of strangled animals and from sexual immorality. You will do well to avoid these things."

We learn about The Burnt Offering… which was “the sacrifice of unblemished male animals from cattle or flock or certain birds… in which the whole animal was burned on the altar.”

And The Grain Offering… in which “a small portion of the dough made from the flour of the inner kernel of the wheat grain was mixed with olive oil and frankincense and was burnt on the altar.”

And The Peace Offering (a.k.a., “The Fellowship Offering”) … which “…included a sacred meal participated in by the priest and the worshiper.”

And The Sin Offering… in which The guilty person would bring in an animal and “pass” their sins onto the animal. And the animal would then be killed and given as an offering.

And The Guilt Offering… in which anyone who had sinned unintentionally needed to make restitution by presenting animal offerings.

This is a psalm of David from around that time when he pretended to be insane before Abimelek of the Philistines, who drove him away, and he left. This psalm is an acrostic poem, the verses of which begin with the successive letters of the Hebrew alphabet. David says, "O magnify the LORD with me! I sought him and he answered. Taste and see that the LORD is good. He is close to the brokenhearted."

This Davidic psalm says, "O LORD, fight against those who fight against me! Then I will rejoice. They repay evil for good. Vindicate me in your righteousness!"

This Davidic psalm contains a note at the beginning "for the director of music." It refers to David as "the servant of the Lord." The writer says, "The wicked flatter themselves. Your love, O LORD, reaches to the heavens. In your light we see light. There the evildoers lie fallen."

The word "oracle" is used in verse 1 of this psalm. "Oracle" is a technical term meaning "prophetic utterance," referring to divine revelation or insight. Rather than the usual oracle of judgment or deliverance, as seen in the prophetic books, Psalm 36 might better be called "insight" into the fate of the arrogant, self-motivated and self-focused wicked, who exhibit no "fear of God" but who often seem to prosper nonetheless.

This Davidic psalm is an acrostic poem, the stanzas of which begin with the successive letters of the Hebrew alphabet. it says, "Do not be envious of evildoers, for they will fade like the grass. The righteous will inherit the earth. The LORD is their stronghold."

The note at the beginning of this psalm of David states that it is a "petition." David says, "O LORD, your arrows have pierced me! My guilt has overwhelmed me. My strength fails me. I confess my sin. Do not forsake me, my God!"

This Davidic psalm contains a note at the beginning stating that it is "For the director of music. For Jeduthun." David says, "When I was silent, my anguish increased. O LORD, what is the measure of my days? My hope is in you. Deliver me from my transgressions."

The terms "alien" and "stranger" that are used in this psalm indicate a class of non-Israelites who were permitted to reside among God's people within the promised land but who had no inheritance there. These resident aliens could experience a degree of social interaction with the native inhabitants but enjoyed few rights. David drew upon their experience as an analogy to the kind of painful barriers sin had erected between himself and God.

This Davidic psalm also contains a note at the beginning "for the director of music." David says, "I waited patiently for the LORD. He drew me up from the pit. I delight to do your will, O God. My heart fails me, but you are my help."

In this psalm, when David says "it is written about me in the scroll", the scroll he is likely referring to is the personal copy of the law the king was to take as his covenant charter at the time of his ascension to the throne.

This Davidic psalm also contains a note at the beginning "for the director of music." David says, "Blessed are those who consider the weak. My enemies say, "When will he die?" They gather slander. But you, O LORD, have upheld me."

This is a Davidic psalm in which the writer says, “The LORD is my light and my salvation. My heart will not fear. I will seek your face, O LORD; do not forsake me! Wait for the LORD.”

This is a Davidic psalm in which the writer says, “To you I cry, O LORD my rock. Repay the wicked according to their works! The LORD is my shield. He is the strength of his people.”

This is a Davidic psalm in which the writer says, “Ascribe to the LORD glory! The voice of the LORD is over the waters. The voice of the LORD shakes the wilderness. The LORD is king!” This hymn to YHWH served as a testimony and protest against the worship of the Canaanite god Baal, who was thought to have been the divine power present in the thunderstorms.

This is a Davidic psalm which was written for the dedication of the temple, which was built after the death of David by his son Solomon. The writer says, “I will exalt you, O LORD, for you spared me from going down to the pit. I cried to you for mercy. You turned my mourning into dancing.”

This is a Davidic psalm which contains a note at the beginning saying it is for the director of music. The psalmist says, “In you, O LORD, I seek refuge. Into your hand I commit my spirit. Deliver me from my enemies. Praise the LORD for his steadfast love!” The psalmist uses a picture of a besieged city to describe

This is a “maskil” of David, which is possibly a musical term for a contemplative psalm perhaps intended for a more mature audience. David says, “Blessed are those whose sins are forgiven. When I kept silent, my bones wasted away. You surround me with glad cries of deliverance!”

This psalm was written by an anonymous author, who says, “Rejoice in the LORD! Make melody, play skillfully. Let all the earth fear the LORD. His eye is on those who hope in his steadfast love.”