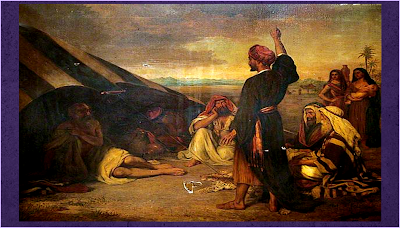 Job said, "My heart does not reproach me. Let my enemy be as the wicked! His many sons are for the sword. The wind sweeps him from his place.There is a mine for silver, but where is wisdom found? It is hidden from the eyes of all living. The fear of the Lord is wisdom! Oh, for the days when God watched over me! When I took my seat in the square. I was father to the needy and comforted the mourners. But now younger men mock me. They do not hesitate to spit at me. God has cast me into the mire. When I expected good, evil came. Does God not see my ways? Have I lied? Have I refused to help the poor? Have I put my trust in money? Let the Almighty answer me!"

Elihu’s Perspective (The Voice of the Wisdom Tradition)

Elihu was angry with Job and his three friends. He said, "I am young, but it is not only the old who are wise. I will have my say. Job, please listen to my words. God does speak, perhaps in a dream or through pain. He does this to deliver a person from the pit." 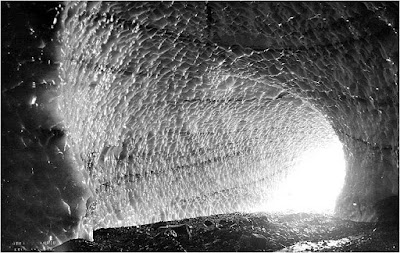 Zophar said, "My understanding inspires me to answer. The triumph of the wicked is short. His food will turn sour in his stomach."

Job said, "Listen to me. Why do the wicked grow mighty? How often do they have trouble? Who repays them? Your answers are empty!"

Eliphaz said, "Is not your wickedness great? You withheld bread from the hungry. Is not God high? Submit to him and be at peace."

Job said, "If only I knew where to find God! When he has tested me, I shall come forth as gold. But he does whatever he pleases. The wounded cry out, but God charges no one with wrong. Some rebel against the light; they are exalted a while, and then are gone."

Bildad said, "Dominion and awe belong to God. Who can be righteous before him? Even the stars are not pure in his sight!"

Job said, "How you have helped the weak! Sheol is naked to God. The pillars of heaven tremble. These are the fringes of his ways!" 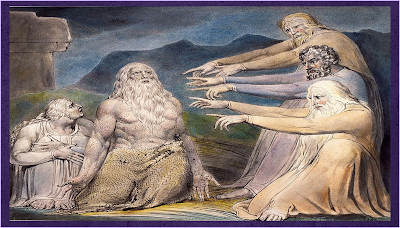 Job said, "I want to argue my case with God. Be quiet and I will speak. Though he slay me, I will hope in him. God, why do you hide your face? Man is like a fleeting shadow. If a tree is cut down, it will sprout again, but will a man live again? You overpower him forever."

Eliphaz said, "Your own mouth condemns you! Why do you turn against God? The wicked will be like a vine stripped of unripe grapes."

Job said, "You're miserable comforters! God has torn me and shattered me. But my prayer is pure. Even now, my advocate is on high! My spirit is broken. He has made me a byword. But come again all of you! I will not find a wise man among you. Where is my hope?"

Bildad said, "Why are we stupid in your sight? Indeed, the light of the wicked goes out. His roots dry up and his branches wither."

Job said, "How long will you torment me? God counts me as an enemy. My closest friends abhor me. But I know that my redeemer lives!" 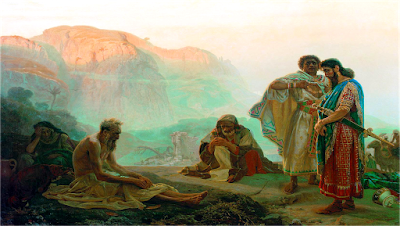 Job’s friends all have their own opinions about why Job is suffering the way he is. They continue to take turns trying to come up with explanations. Job said, "My misery would outweigh the sand of the seas! You have proved no help. Show me how I have been wrong! Would I lie to you? O God, my life is but a breath! Therefore I will speak out. What is man, that you examine him? Why have you set me as your target?"

Bildad said, "Does God pervert justice? Learn from past generations. He will not reject the blameless, nor will he uphold evildoers."

Job said, "How can a man dispute with God? His power is vast! But he destroys the innocent. If only there were a mediator between us! God, why do you reject the work of your hands? You know that I am not guilty! Why did you bring me out of the womb? Leave me alone."

Zophar said, "Should your babble go unanswered? God exacts less than your guilt deserves! Reach out to him and you will find hope."

Job said, "Who does not know all these things? With God are wisdom and power. He brings darkness into light. He destroys nations." 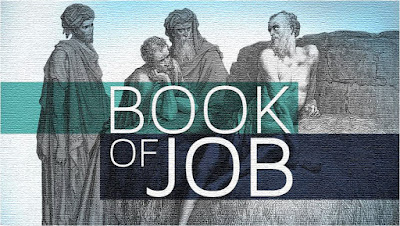 Why do bad things happen?

Fate? Chance? Punishment? Punishment for personal sin? Result of “the fall”? The devil? We’re cursed? We’re pieces in a cosmic game? God is bored? God lets the universe run on its own? No reason at all?

The book of Job is one of the oldest stories ever told. The main core is made up of ancient Hebrew poetry with possibly pre-Israelite origins. The prose prologue and epilogue were added later after the Jews were destroyed by Babylon. The prologue gives a glimpse into the spiritual realm that Job never sees, in which God sits in his heavenly court room and the accuser, the “shatan” (the prosecuting attorney) places God and God’s goodness on trial.

Now, Job is a good man. The story-teller insists that Job is the greatest man in his whole part of the earth. Job is also a wealthy man, with land, crops, animals, servants, and a house full of kids. But in this story everything falls apart for Job. Much of his wealth is stolen. The rest is consumed in a fire. His children are tragically killed.

But Job’s response is, “Naked I came from my mother’s womb, and naked will I depart. The LORD gave and the LORD has taken away. May the name of the LORD be praised.”

After all this, he ends up with painful sores all over his body. He sits in ashes mourning and scrapes his skin with a piece of broken pottery. His wife says to him, “Are you still holding on to your integrity? Curse God and die!”

They sit in silence for seven days with Job, a practice known as “sitting shiva.” They all have their own opinions about why Job is suffering the way he is. They take turns trying to come up with explanations.

Job breaks the silence first, saying, “May the day of my birth be cursed! Why was I born if God is only going to give me a life of misfortune? Why is light given to him who suffers? I have no rest, only turmoil?”

Eliphaz said, "Will you become impatient? When did the innocent ever perish? I heard a voice: 'Can a man be more righteous than God?' Who will answer you? Man is born to trouble. As for me, I would seek God. Do not despise his discipline. He wounds, but he binds up."

READ IT! - Introduction to the Book of Obadiah 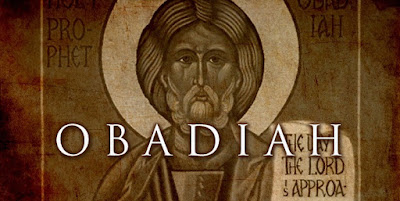 Introduction to the Book of Obadiah

It is generally accepted that the book was written around the time that Jerusalem fell, around 587 B.C. Not much is known about the prophet Obadiah. “Obadiah” means “servant of Yahweh” He is speculated to have been buried in Samaria. Obadiah is the shortest book in the Old Testament, confined to a single chapter best known as “The Vision of Obadiah.” The book is set right after the fall of Jerusalem to the Babylonians around 587 B.C. When Jerusalem fell, the Edomites watched and did nothing to help. Instead, they joined in the destruction. They believed that God would act on their behalf and protect them, even though they were a violent and angry people.

The prophecy: God will destroy Edom! Israel and Edom had partaken in a long-time family feud, going all the way back to Jacob’s theft of his brother Esau’s birthright – and even before then Genesis portrays these two twin brothers as fighting “in utero.” The prophecy came true and God smote the Edomites.

In the New Testament, Jesus says that we must forgive and even love our enemies. Edom chose revenge over forgiveness, and the judgment of God fell upon them. The descendants of Jacob eventually returned home, but the descendants of Esau were permanently wiped off the face of the earth.

“See, I will make you small among the nations;
you will be utterly despised.
The pride of your heart has deceived you,
you who live in the clefts of the rocks
and make your home on the heights,
you who say to yourself,
‘Who can bring me down to the ground?’
Though you soar like the eagle
and make your nest among the stars,
from there I will bring you down,”
declares the Lord.

"Because of the violence against your brother Jacob,
you will be covered with shame;
you will be destroyed forever."


Posted by Daniel Sheets at 2:00 AM No comments:

READ IT! - Introduction to Lamentations 5 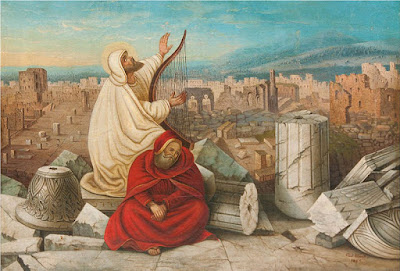 Chapter 5 is a prayer that Zion's reproach may be taken away in the repentance and recovery of the people.

“You, Lord, reign forever;
your throne endures from generation to generation.
Why do you always forget us?
Why do you forsake us so long?
Restore us to yourself, Lord, that we may return;
renew our days as of old
unless you have utterly rejected us
and are angry with us beyond measure.”