READ IT! - Introduction to 1st Thessalonians 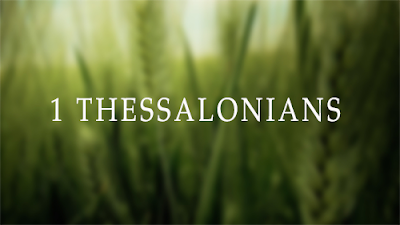 Paul, missionary Apostle to the Gentiles.

Probably Corinth or nearby Athens.

The Parousia and the Resurrection

Apparently, some Thessalonians believed that Jesus’ reappearance would occur so swiftly that all persons converted to Christianity would live to see the Second Coming. That belief was shaken when some believers died before Jesus had reappeared. What would become of them? Had the dead missed their opportunity to join Christ in ruling over the world? Paul explains that the recently dead are not lost but will share in the glory of Christ’s return.

To denote Jesus’ arrival from heaven, Paul uses the term Parousia, a Greek word meaning “presence” or “coming,” a word the Thessalonians associated with the public appearance of a Roman Emperor.

On Not Calculating “Dates and Times”

Although he eagerly expects Jesus’ reappearance “soon,” Paul has no patience with those who try to predict the exact date of the Parousia. He discourages speculation and notes that calculating “dates and times” is futile because “the Day of the Lord will come like a thief at midnight.”

In 1st Thessalonians 4:3-8, Paul’s exhortation to get a wife in holiness and honor and not in the passion of desire ‘is not a denial of the role of sexual desire in marriage. Instead, it gives advice on how to select a mate, suggesting that one should look beyond a prospective mate’s physical appeal to broader issues of character.’”

The Role of the Spirit

Paul reminds the Thessalonians that the Holy Spirit’s visible activity among them is also evidence of the world’s impending transformation. Paul believes that Christian prophets should play a significant role in the churches, but he is aware that enthusiastic visionaries can cause trouble. Believers are to distinguish between “good” and “bad” inspirations, avoiding the latter, but they are not to inhibit charismatic behavior.

Paul then gives a defense of his apostleship and discusses the Thessalonians’ conversion. He mentions how badly they had been treated in Philippi and so they were afraid to share the Gospel with the Thessalonians, but they realized their goal was not to please people but to please God.

He says that they never used flattery or put on a mask to cover up greed or were looking for praise from people, but instead they were like young children among them, caring for them like a nursing mother cares for her child. Paul says that they urged them to live a life worthy of God, who called them into his kingdom and glory.

Paul then thanks God because they received the working Word and became imitators of God’s churches in Judea. He then ironically states that on the other hand the Jews he tried to work with…

And he adds that the wrath of God has come upon them at last.

Paul then expresses his desire to visit them again but that Satan has hindered this. He adds that when Jesus comes the Thessalonians will be the apostles’…

He then explains why they decided to send Timothy to them… so that he could encourage them and report back about their faith. And he adds that Timothy has returned to them with a good report which has encouraged them in their persecution

The letter then contains a transitional Benediction:

Paul then discusses the Lord’s return as a motive for sanctification. He tells them to keep learning how to please God more and more every day, and specifically tells them not to lust like the pagans who don’t know God, and to not take advantage of a brother or sister.

God will punish all those who commit such sins
God did not call us to be impure
God called us to live a holy life
Anyone who rejects this instruction, rejects God’s Holy Spirit

But he then says that they don’t need to talk to them about love because God has taught them to love one another, and they love all of God’s family throughout Macedonia.

Paul then discusses the imminent return of the Lord. First, he discusses Resurrection, saying that he doesn’t want them to be uninformed about those who sleep in death or to grieve like the rest of mankind who have no hope.

He presents the first piece of evidence of the resurrection… the Resurrection of Christ. He says, ”For we believe that Jesus died and rose again, and so we believe that God will bring with Jesus those who have fallen asleep in him.”

He then presents the second piece of evidence of the resurrection… the New Revelation given to Paul. He says, “According to the Lord’s word, we tell you that we who are still alive, who are left until the coming of the Lord, will certainly not precede those who have fallen asleep.”

He then provides specific details and a succession of eschatological events:

"For the Lord himself will come down from heaven, with a loud command, with the voice of the archangel and with the trumpet call of God"
"And the dead in Christ will rise first."
"After that, we who are still alive and are left will be caught up together with them in the clouds to meet the Lord in the air."

He says that the result of all this will be living life forever with Christ, and he says to encourage each other with these words.

He states that the Day of the Lord will come like a thief in the night, and that while people are saying, “Peace and safety,” destruction will come on them suddenly, as labor pains on a pregnant woman, and they will not escape. But he adds that the Day of the Lord will be no surprise to believers because they are children of light and that is their responsibility to stay alert. He says not to be like those who get drunk and pass out but to be sober and to live in the day, putting on faith and love as a breastplate and the hope of salvation as a helmet

Paul then speaks of the promises of God. The first promise is that God has appointed us to escape from wrath through salvation in Jesus. The second promise is resurrection for all believers. He then offers a final eschatological encouragement, instructing them to continue building each other up.

Paul then calls for proper hierarchical relations within the Body, saying to acknowledge those leaders who…

He says to hold them in the highest regard in love because of their work, and to live in peace with each other.

He also calls for reverence toward God, saying that God’s will for you in Christ Jesus is to…

Rejoice always
Pray continually
Give thanks in all circumstances

He then speaks about critical receptiveness of prophecy, saying:

Do not quench the Spirit
Do not treat prophecies with contempt

But also to test all prophesy in order to…

Hold on to what is good
Reject every kind of evil

Paul then asks for prayer and instructs that this letter be read to all the brothers and sisters, and he makes some concluding remarks, including a benediction:

“May God himself, the God of peace, sanctify you through and through. May your whole spirit, soul and body be kept blameless at the coming of our Lord Jesus Christ. The one who calls you is faithful, and he will do it.”