Three years after David’s son Absalom flees from the capital for killing his half-brother in revenge for raping his sister, David’s general Joab gets a "wise woman" to go tell David a story. She tells him that she is a widow and that her two sons got into a fight out in a field, and that one killed the other and was now on the run from the people who not only wanted to kill him for his crime, but also wanted him dead so they could claim the inheritance of his dead father for themselves. David says he will issue an order on her and her son's behalf. She then asks him why he will not do the same thing for his own son Absalom. David sees he's been trapped and is like "Joab put you up to this, didn't he?" David sends Joab to go bring Absalom back home, but David makes him live in a different house and refuses to see him.

After two years, Absalom really wanted to see his dad, so he sent for Joab, but Joab wouldn't come... so Absalom decided to get his attention by setting his crops on fire. This got Joab's attention and he arranged for Absalom to meet with his father. Over time, Absalom begins to gain allies through bribery and his good looks, and begins to overthrow David. He would get up first thing in the morning and greet visitors to the city in order to flatter them and plant the idea in their heads that he would make a great ruler. He tells his father he needs to go make sacrifices over in the city of Hebron, but when he gets there he has all of his followers declare him king of Hebron.

David and his men decide that they must leave the capital city before Absalom shows up to make war. Mephibosheth’s grandson sides with Absalom. Shimei, one of Saul's cousins, curses David and throws dirt and rocks at David and his men as they are fleeing, but David admits that he probably deserves it, and orders his men to leave Saul's relative alone, saying, "What if God told him to curse me?"

Meanwhile, Absalom takes over David’s palace, declares himself king over all of Israel, and sleeps with David’s concubines on the roof where everyone can see. He also sets up a monument to himself and appoints Amasa, Joab's uncle, as his army general in place of David's general Joab. 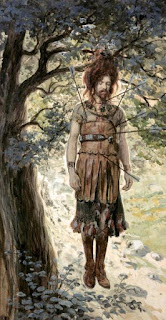 Ahithophel, who served as counselor to King David has now sided with Absalom, and advises him to chase after David as quickly as possible while he is still weak and to kill only the king. However, David has spies in Absalom's court in the form of his friend Hushai the Arkite and in his two priests Abiathar and Zadok. Hushai also gives Absalom advice and tells him not to hunt down David yet, but first go and gather up all the men of Israel so that they may have the strength to destroy an entire city if necessary to get to David. Absalom goes with Hushai's advice, but as he is traveling, David's spies send word to David via Hushai, via Zadok and Abiathar the priests, via a servant girl, via a man and his wife, via two scouts (who are also hidden by the wife in a well when they are being pursued by Absalom's men) all the way back across the river to David.

David and his army march out after Absalom and his army and a heavy battle takes place in the forest of Ephraim. David orders his men not to kill Absalom, but only to capture him. Joab and his men cross paths with Absalom during the battle and a donkey chase through the woods ensues. However, Absalom’s long flowing hair gets stuck in a tree branch as his donkey passes beneath it, and he is left there hanging by his hair. Joab catches up to him and puts three javelins in his heart. David mourns for Absalom, but eventually Joab tells him to stop disgracing his army by crying over his enemy.

We then hear about more of David’s Wars. First, we hear about Sheba’s rebellion. David returned to Jerusalem, but a Benjamite named Sheba rebelled against David and all of Israel followed him. Judah was the only tribe who remained loyal to David.

Joab went after Sheba to kill him. On the way, he ran into his uncle Amasa – the man Absalom had previously given Joab’s job to – and Joab killed him. Later, they had to clean up the body from the road because David’s army kept stopping to look at it and this was causing a traffic jam... apparently rubbernecking was a thing back then, too.

Joab was going to lay siege to the town where Sheba was staying and have the whole place destroyed when a “wise woman” came out and told him to rethink his strategy. She asked him, "What can we do for you?" Joab asked for Sheba, and the woman went back into the city, and after a while Sheba’s head came flying over the top of the city wall and Joab picked it up and went home.