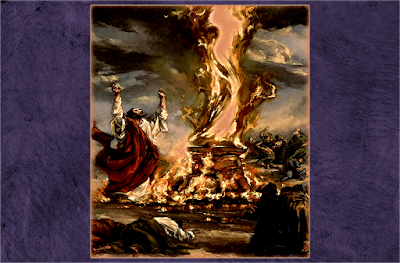 Now after three years of drought, God told Elijah to go to King Ahab and tell him that it would rain again. But on the way to Ahab’s palace in Samaria, he bumped into Ahab’s servant Obadiah. Obadiah was a secret believer in Yahweh, and he had hidden 100 prophets in two different caves from Jezebel when she was going around killing all of God’s prophets. Elijah said, “Go tell your master, ‘Elijah is here.’” And Obadiah made Elijah promise not to pull another disappearing trick. Obadiah delivered the message to King Ahab. When Elijah arrived, Ahab said, “Is that you, you troubler of Israel?”

Elijah told Ahab to have the prophets of Baal and all the people of Israel meet him on Mount Carmel. Mount Carmel is a high ridge next to the Mediterranean Sea, where the effects of drought would have been least apparent. Elijah said to the people, “How long will you waver between two opinions? If the LORD is God, follow him; but if Baal is God, follow him.” Both the LORD and Baal were said to ride the thunderstorm as their divine chariots (see Psalm 104:3); thunder was God’s voice (see Psalm 29:3-9) and lightning his weapon (see Psalm 18:14), and the same was purported of Baal.

Elijah proposed a test to see which God was the true God. The prophets of Baal killed a bull, put it on their altar, and called on Baal to send fire down from heaven to consume the sacrifice. The prophets of Baal called on Baal all day long to no avail. They wailed, beat themselves up, and cut themselves with swords to try and get Baal to respond.

Self-mutilation is an indicator of spiritual decadence. In the Ugaritic Baal myth the deities Ilu and Anatu mourn the death of the divine Baal by scraping their skin with sharp stones, cutting their faces with razors and thoroughly mutilating their bodies. Like the gods they worshiped, the Canaanites also marred their bodies in mourning rituals and other religious ceremonies in an attempt to invoke their deities. In the myth, Baal later revived and received kingly authority; the Canaanites were reenacting the mourning that had preceded Baal’s rise to prominence.

Then the people went over to watch Elijah. Elijah built an altar of 12 stones, representing the 12 tribes of Israel, he then killed a bull and put it on the altar, and then he then completely drenched the altar and the sacrifice with water ...three times!

“LORD, the God of Abraham, Isaac and Israel, let it be known today that you are God in Israel and that I am your servant and have done all these things at your command. Answer me, LORD, answer me, so these people will know that you, LORD, are God, and that you are turning their hearts back again.”

Then the fire of the LORD fell and burned up the sacrifice, the wood, the stones and the soil, and also licked up the water in the trench. The people proclaimed, “Yahweh is God!” Elijah commanded the people to kill all the prophets of Baal.

Elijah and his servant then climbed to the top of the mountain to watch for rain. After looking out to sea seven times they spotted a tiny cloud. They descended and warned Ahab to get in his chariot and go back to Jezreel before the rains came. Elijah watched as Ahab tried to drive through the storm. Elijah ran down the mountain, caught up to Ahab’s chariot, and ran ahead of him, guiding him through the storm all the way back to Jezreel. When Ahab arrived, he told Jezebel the news. But Jezebel tried to kill Elijah.

Elijah escaped and ran away to the desert, leaving his servant in Beersheba. Elijah sat under a broom bush and prayed that God would kill him, saying, “I’ve had enough!” Elijah fell asleep, but an angel suddenly appeared, woke him up, and gave him baked bread and water. Elijah ate, drank, and went back to sleep. The angel returned, woke him up again, and urged him to eat, saying, “The journey is too much for you.” Elijah was strengthened by the food, and he traveled through the wilderness for forty days and forty nights until he reached Horeb, the mountain of God. Horeb is another name for Mount Sinai.

Then the LORD told Elijah to go back the way he came and go to the desert of Damascus, saying:

“...anoint Hazael king over Aram
“…anoint Jehu son of Nimshi king over Israel…”
“…anoint Elisha son of Shaphat... to succeed you as prophet.”

And then God says, “Yet I reserve seven thousand in Israel—all whose knees have not bowed down to Baal and whose mouths have not kissed him.”

Elijah then returns from the mountain and finds Elisha. He is plowing in a field behind 12 pairs of oxen. Elisha is anointed by Elijah, and receives Elijah’s cloak. He asks Elijah to wait for him so he can kiss his parents good-bye. He then kills his oxen, chops up his plow, uses the wood to cook the meat and feeds the other farmers. And Elisha feeds Elijah, and then follows Elijah. The transfer of Elijah’s cloak to Elisha signified a transmission both of Elijah’s mission and of his ability, with God’s help, to accomplish it. Elisha’s sacrifice of his oxen was a thank offering for his calling – a celebration in which his neighbors were invited to join. His burning of the farm equipment signified a complete break with his past. From that time on, Elisha became Elijah’s protégé.

We then read about how Ben-Hadad of Aram attacked Samaria. He marched out his army and demanded gold and women from Ahab. Ahab agreed to the terms, but Ben-Hadad was looking for a fight. A prophet promised Ahab that the LORD would give him victory. Ahab gathered 7,000 men and defeated the Arameans. Ben-Hadad escaped, and the prophet warned Ahab that he would attack again next spring. Ben-Hadad attacked from the plains, thinking Israel’s God was limited to the mountains. Israel killed 100,000 soldiers and captured Ben-Hadad as he fled. Later, Ben-Hadad made a deal with Ahab and Ahab let him go.

We then read about a prophet who condemns Ahab. This first prophet goes to a second prophet and says, “Punch me in the face!” the second prophet says, “No way!” Then the first prophet says, “You will be eaten by a lion for your disobedience!” he then goes to a third prophet and says, “Punch me in the face!” And the third prophet is like, “Okay.” The first prophet then waited on the side of the road for Ahab to pass by and pretended he was someone who had been in a battle. And he says, “I captured a prisoner in battle, and I had another man guard him under penalty of death, but he let him escape. What should I do?” And Ahab is like, “That’s your problem. You figure it out.” The prophet then says, “I am God’s prophet! And you have released a man that God determined should die! It will now be your own life for his! And Israel’s for Aram’s!” Then Ahab went home “sullen and angry.”

We then read the story of Naboth’s Vineyard. Ahab wanted Naboth’s vineyard, but Naboth wouldn’t sell. Ahab pouted for a long time until Jezebel helped him come up with a scheme. They hired some thugs to go into a crowd and accuse Naboth of cursing God and the king. The crowd dragged Naboth outside the city and stoned him. Ahab then acquired the dead man’s land.

Elijah arrived with a message from God:

“Have you not murdered a man and seized his property?”
“In the place where dogs licked up Naboth’s blood, dogs will lick up your blood—yes, yours!”
“I have found you because you have sold yourself to do evil in the eyes of the Lord.”
“I will cut off from Ahab’s descendants all who piss against the wall in Israel—slave or free.”
“Dogs will devour Jezebel by the wall of Jezreel.”

Ahab changed his attitude after this and mourned and wore sackcloth. God decided to wait until after Ahab’s death to destroy his house.

We then read about an alliance that is made between Ahab of Samaria and Jehoshaphat of Judah. Jehoshaphat reigned over Judah for 25 years. He was a good king…but kind of dummy, too. He forbade worshiping idols, but failed to destroy them… He built ships, but they never set sail… The goal of the alliance with Ahab was to attempt to take back territory of Gilead from the Arameans. Jehoshaphat wants to inquire of the LORD first. Ahab’s prophets back his battle plan, but Jehoshaphat doesn’t buy it.

The character of Micaiah, the prophet of Yahweh, is then introduced. Jehoshaphat wants to hear Micaiah’s word, but Ahab hates him because of his negative messages about him. Pressure is put on Micaiah to agree with Ahab’s prophets, but he refuses to give in. Micaiah is sarcastic, and so Ahab makes him swear an oath of truth.

Suddenly, a random prophet slaps Micaiah, demanding more details. Micaiah says, “You’ll get your answers on the day you flee from battle.”

“If you ever return safely, the Lord has not spoken through me. Mark my words, all you people!”

Ahab and Jehoshaphat fight the Arameans. Ahab disguises himself and uses Jehoshaphat as a decoy. The Arameans chase Jehoshaphat, but soon realize their mistake. Someone shot an arrow at random and it struck Ahab. The battle raged all day long and Ahab bled to death in his chariot. The battle was a disaster and everyone fled back to their hometowns. Ahab’s body was brought back to Samaria and dogs licked the blood off his chariot.

Ahaziah replaced Ahab as king of Israel when Ahab died. He was evil, too.