Manasseh became king of Judah when he was 12 years old. His reign lasted for 55 years. He was bad. He worshiped other gods. He rebuilt the idols and shrines his father Hezekiah had torn down. He sacrificed his own son. He built new altars inside the Temple of the LORD for worshiping the stars. He put an Asherah pole inside the Temple of the LORD. He practiced divination, sought omens, and consulted mediums and spiritists. The text says, “Moreover, Manasseh also shed so much innocent blood that he filled Jerusalem from end to end…” The people followed Manasseh in his evil ways. The text says that the people of Jerusalem had become worse than the pagans who had lived in the land before them. God spoke through many prophets condemning Manasseh’s ways. God said that Judah would eventually be judged as the rest of Israel had been judged.

Amon was king of Judah 2 years. He was bad. His own officials assassinated him. His son Josiah became king after him.

Josiah becomes king when he is only 8 years old. He reigns for 31 years. Josiah arranges to have the Temple of the LORD cleaned and repaired. The High Priest Hilkiah finds “The Book of the Law” while cleaning the Temple. Josiah’s secretary reads him The Law. Josiah tears his robes and weeps because he now knows how far from God Judah has strayed. He orders priests to inquire of the LORD so they might somehow avoid the curses of The Covenant.

The prophetess Huldah’s message: The land is indeed under the curse. God is pleased with Josiah. Jerusalem will be safe during his lifetime.

Josiah reads the Law to the people. The people pledge to be faithful to the Covenant with God. 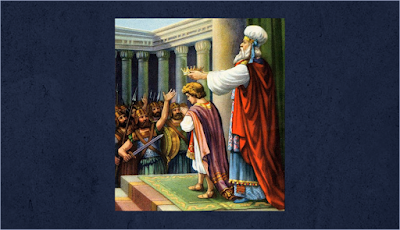 Josiah destroys all of the idols of his ancestors, including the idols Solomon made for his wives, and the “Tophit” used for child sacrifice in the valley. He piles up the skeletons of all the false priests and prophets of the golden calves of Jeroboam on top of the place where the golden calf at Bethel once stood, fulfilling Ahijah’s prophecy. He gets rid of the mediums and spiritists. He has the people celebrate Passover again. The text says, “Neither before nor after Josiah was there a king like him who turned to the Lord as he did—with all his heart and with all his soul and with all his strength, in accordance with all the Law of Moses.”

As a part of the Deuteronomistic History, Joshua and Josiah book end each other, with Joshua at the beginning and Josiah at the end. They are both king-like figures, both copy the Law, both read it to the assembly, and both celebrate the Passover. Not to mention the obvious similarities in both of their names.

Later, the Egyptians make an alliance with the Assyrians, and Josiah fights against Pharaoh’s army, but is killed in battle.

Jehoahaz became king of Judah and reigned for 3 months. He was bad. Pharaoh Necho captured him and dragged him in chains to Egypt where he died. Necho made Judah his vassal and made them pay tribute to him. He appointed Josiah’s son Eliakim to replace Jehoahaz as king. He changed Eliakim’s name to Jehoiakim.

Jehoiakim was king of Judah for 11 years. He was bad. During his reign, King Nebuchadnezzar of Babylon invaded the land, and Judah became Babylon’s vassal for three years.

After this, Jehoiachin became king of Judah for 3 months. He was bad. During his reign, Nebuchadnezzar laid siege to Jerusalem again and took away all the gold from the Temple of the LORD and the royal palace as Isaiah had predicted. Nebuchadnezzar took 10,000 people from Jerusalem and exiled them to Babylon, including the entire army and the royal family. He made Mattaniah, Jehoiachin’s uncle, king in his place and changed his name to Zedekiah.

Zedekiah was Nebuchadnezzar’s puppet-king over Judah for 11 years. Eventually, Zedekiah rebels against King Nebuchadnezzar of Babylon. And the Babylonian army besieges Jerusalem for two years. An extreme famine breaks out in the city, and the Babylonians finally break through the walls. Jerusalem’s army flees towards the Arabah, but is captured. Zedekiah is also captured, and his sons are executed in front of him, and then Zedekiah’s eyes are poked out, and he is dragged away in chains to Babylon. Almost all of Jerusalem’s people are captured and exiled to Babylon

The Babylonians remove the treasures and holy items from the Temple of the LORD, and destroy what is left. The priests are taken to Babylon and executed in front of Nebuchadnezzar.

A guy named Gedaliah is appointed governor over Judah by Nebuchadnezzar. He ruled over “the poorest of the poor.” Eventually, Gedaliah gets assassinated by zealots, and the people flee to Egypt in fear of Babylonian punishment.

Meanwhile, former king Jehoiachin had spent 37 years in prison, and was finally released when Awel-Marduk became king of Babylon. The king of Babylon honored him and allowed him to eat at the king’s table. Babylonian cuneiform records have even confirmed Jehoiachin’s regular food ration from the royal table.