Chapters 20-24 is God’s response to Israel’s sins and takes us to the end of Ezekiel’s oracles of judgment against Judah.

First, we hear how rebellious Israel was purged:

So God says, “So I gave them other statutes that were not good and laws through which they could not live; I defiled them through their gifts—the sacrifice of every firstborn—that I might fill them with horror so they would know that I am the Lord.’”

Then we hear how rebellious Israel will be renewed. God says through Ezekiel, “I will accept you as fragrant incense when I bring you out from the nations… and I will be proved holy through you in the sight of the nations.” But the peoples’ response is: “Isn’t he just telling parables?”

We then hear about Babylon as God’s sword of judgment. Ezekiel prophesied that the king of Babylon would come to a fork in the road and would cast lots to see in which direction he should conquer, and all of his idols and magic would tell him to go towards Jerusalem.

We then hear again about God’s Judgment on Jerusalem’s sins. Ezekiel described Israel as a nation of dross, or the refuse material that rises to the top of molten metal. God would “set fire” to Israel and remove the “dross,” or “impurities,” from the “precious metals,” and throw the dross away.

Ezekiel then tells the parable of the two adulterous sisters

Ezekiel described two sisters – Oholah and Oholiba. Oholah represented Samaria, the northern capital. Oholibah represented Jerusalem, the southern capital. Both sisters were wicked, but God took them as His own and married them anyway. Oholah was so evil that God gave her over to be judged by the Assyrians. Her sister Oholibah learned nothing from this and became worse than her sister, and would be judged more severely.

Ezekiel then tells the parable of the cooking pot

In January of 589 B.C., the Babylonian siege of Jerusalem began. In July of 587 B.C., the city finally fell to Nebuchadnezzar’s forces. On the day the siege began, Ezekiel prophesied and compared Jerusalem to a rusty cooking pot. Just as a cook would throw out stew that had mixed with rust, so would God throw out his people who had mixed with sin. 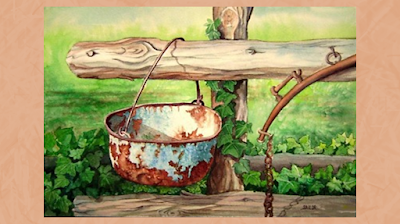 We then read about the death of Ezekiel’s wife. God warned Ezekiel beforehand that his wife was going to die and told him how he should respond. Ezekiel was to mourn inwardly but make no external display of mourning and lamentation. The people asked why he did not appear to be sad about his wife’s death. Ezekiel told them that it was because soon all of the inhabitants of Jerusalem would experience so much horror that they would find themselves unable even to cry or mourn.

Chapters 25-32 are made up of Ezekiel’s oracles against the nations.

To Ammon:
Babylon will destroy you!

To Moab:
Babylon will destroy you, too!

To Edom:
God will judge you because you cut down my people as they fled from their enemies.

To Philistia:
God will also judge you!

To Tyre:
You exalted yourself above all the gods, but you will fall! You will be swept away by the sea! ...Some people associate this passage with the fall of Satan.