Here, the prophet discusses true fasting. God’s people had complained to Him because He had apparently ignored how well they practiced fasting. He tells them that they didn't fast as well as they thought, following the letter of the law rather than the spirit of the law.

“Yet on the day of your fasting, you do as you please
and exploit all your workers.
Your fasting ends in quarreling and strife,
and in striking each other with wicked fists.
You cannot fast as you do today
and expect your voice to be heard on high.”

“Is not this the kind of fasting I have chosen:
to loose the chains of injustice
and untie the cords of the yoke,
to set the oppressed free
and break every yoke?
Is it not to share your food with the hungry
and to provide the poor wanderer with shelter—
when you see the naked, to clothe them,
and not to turn away from your own flesh and blood?”

The prophet then discussed sin, confession and redemption.

First, he addresses the sin:

“Surely the arm of the Lord is not too short to save,
nor his ear too dull to hear.
But your iniquities have separated
you from your God;
your sins have hidden his face from you,
so that he will not hear.”

Then he offers the confession on behalf of the people:

Then he proclaims redemption:

“‘The Redeemer will come to Zion,
to those in Jacob who repent of their sins,’
declares the Lord.”

The prophet then talks about the future glory of Zion. The prophet announced the lifting of darkness and the arrival of God as the “everlasting light.” Israel would become the light to the nations. Zion, “the City of the LORD,” would be ruled by peace and righteousness. The walls of the city would be called “Salvation” and her gaits “Praise.” 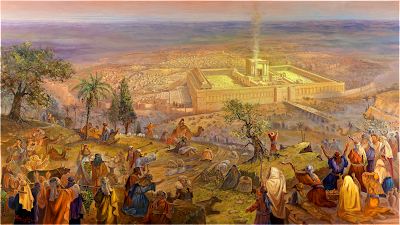 The prophet then talks about the “Year of the LORD’s Favor.”

“The Spirit of the Sovereign Lord is on me,
because the Lord has anointed me
to proclaim good news to the poor.
He has sent me to bind up the brokenhearted,
to proclaim freedom for the captives
and release from darkness for the prisoners,
to proclaim the year of the Lord’s favor…”

At the beginning of Jesus’ ministry, he read from this passage at the Synagogue of his hometown, claiming it was about him, and his neighbors accused him of blasphemy and tried to throw him off a cliff.

“For Zion’s sake I will not keep silent,
for Jerusalem’s sake I will not remain quiet,
till her vindication shines out like the dawn,
her salvation like a blazing torch.
The nations will see your vindication,
and all kings your glory;
you will be called by a new name
that the mouth of the Lord will bestow.
You will be a crown of splendor in the Lord’s hand,
a royal diadem in the hand of your God.
No longer will they call you Deserted,
or name your land Desolate.
But you will be called Hephzibah,
and your land Beulah;
for the Lord will take delight in you,
and your land will be married.
As a young man marries a young woman,
so will your Builder marry you;
as a bridegroom rejoices over his bride,
so will your God rejoice over you.”

In Hebrew, “Hephzibah” means “my delight is in her” and “Beulah” means “married.”

The prophet then gives a community lament, which first addresses God’s day of vengeance and then also redemption…

“Who is this coming with his clothes stained red? …It is the LORD who comes. He has trampled down all the nations in the winepress of His wrath and their blood spattered on His clothing.”

He then offers a praise and a prayer:

“I will tell of the kindnesses of the Lord,
the deeds for which he is to be praised,
according to all the Lord has done for us—
yes, the many good things
he has done for Israel,
according to his compassion and many kindnesses.
He said, “Surely they are my people,
children who will be true to me”;
and so he became their Savior.
In all their distress he too was distressed,
and the angel of his presence saved them.
In his love and mercy he redeemed them;
he lifted them up and carried them
all the days of old.
Yet they rebelled
and grieved his Holy Spirit.
So he turned and became their enemy
and he himself fought against them.”

“But you are our Father,
though Abraham does not know us
or Israel acknowledge us;
you, Lord, are our Father,
our Redeemer from of old is your name.
Why, Lord, do you make us wander from your ways
and harden our hearts so we do not revere you?”

“Since ancient times no one has heard,
no ear has perceived,
no eye has seen any God besides you,
who acts on behalf of those who wait for him.”

“All of us have become like one who is unclean,
and all our righteous acts are like filthy rags;
we all shrivel up like a leaf,
and like the wind our sins sweep us away.”

“Yet you, Lord, are our Father.
We are the clay, you are the potter;
we are all the work of your hand.
Do not be angry beyond measure, Lord;
do not remember our sins forever.”