READ IT! - Introduction to Jeremiah 8-14 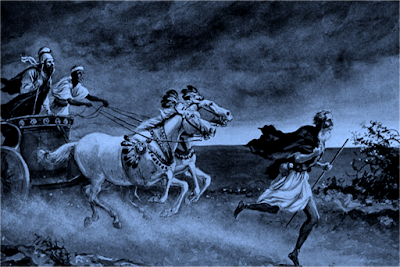 Jeremiah then describes how the Covenant with Yahweh had been broken:

“Proclaim all these words in the towns of Judah and in the streets of Jerusalem: ‘Listen to the terms of this covenant and follow them. From the time I brought your ancestors up from Egypt until today, I warned them again and again, saying, “Obey me.” But they did not listen or pay attention; instead, they followed the stubbornness of their evil hearts. So I brought on them all the curses of the covenant I had commanded them to follow but that they did not keep.’”

The book then describes a plot against Jeremiah. The people of Jeremiah’s hometown of Anathoth plotted to kill him, but God warned him about it, and promised that He would punish these people.

“Everything you do is righteous, LORD…but can I have a word with you about your justice? …Why do you let the wicked prosper?”

“If you have raced with men on foot
and they have worn you out,
how can you compete with horses?
If you stumble in safe country,
how will you manage in the thickets by the Jordan?”

God again warns Jeremiah that his relatives are planning to kill him.

God then proclaims through Jeremiah the pending threat of captivity of his people. He says that the kings and queens of Judah have been poor shepherds of their flocks. He asks, “Can the leopard change his spots? …You’re so bad you couldn’t do good if you tried! …I will expose your shameless prostitution! …I will pull your skirts up over your face!”