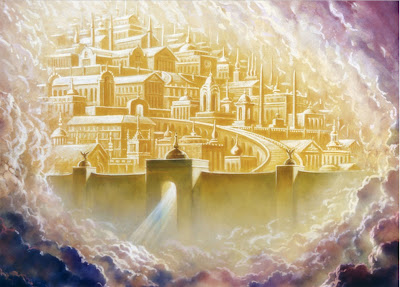 We then see the seven bowls of God’s wrath which are poured onto Earth.

A "foul and malignant sore" afflicts the followers of the Beast.

The sea turns to blood and everything within it dies.

All fresh water turns to blood.

The Sun scorches the Earth with intense heat and even burns some people with fire.

There is total darkness and great pain in the Beast's kingdom.

The Great River Euphrates is dried up and preparations are made for the kings of the East and the final battle at Armageddon between the forces of good and evil.

A great earthquake and a heavy hailstorm occur, and "every island fled away and the mountains were not found."

We then reach the aftermath seen in a vision of John given by "an angel who had the seven bowls."

We see the great Harlot who sits on a scarlet Beast (with seven heads and ten horns and names of blasphemy all over its body) and by many waters… aka Babylon the Great. The angel showing John the vision of the Harlot and the scarlet Beast reveals their identities and fates. Babylon is destroyed. A poem of lament has been inserted here which closely resembles eye-witness accounts of the destruction of Pompeii. The people of the Earth (the kings, merchants, sailors, etc.) mourn Babylon's destruction. The permanence of Babylon's destruction is confirmed.

We then come to the vision of the Marriage Supper of the Lamb, and a great multitude praises God.

We then come to the Judgment of the two Beasts, the Dragon, and the Dead. The Beast and the False Prophet are cast into the Lake of Fire. The Dragon is imprisoned in the Bottomless Pit for a thousand years. The resurrected martyrs live and reign with Christ for a thousand years. After the Thousand Years, the Dragon is released and goes out to deceive the nations in the four corners of the Earth—Gog and Magog—and gathers them for battle at the holy city. The Dragon makes war against the people of God but is defeated. The Dragon is cast into the Lake of Fire with the Beast and the False Prophet.

We then come to The Last Judgment where the wicked, along with Death and Hades, are cast into the Lake of Fire, which is described as the second death.

We then come to the conclusion of the book where Jesus reassures us that his coming is imminent, saying, “I Jesus have sent my angel to testify to you these things in the churches. I am the root and the offspring of David, and the bright and morning star. And the Spirit and the bride say, ‘Come’. And let him that hears say, ‘Come’. And let those that are thirsty come. And whoever will, let them take the water of life freely.”

And John ends the book by saying, “He who testifies to these things says, ‘Surely I come quickly’. Amen. Even so, come, Lord Jesus. The grace of our Lord Jesus Christ be with you all. Amen.”