READ IT! - Introduction to Revelation 9-15 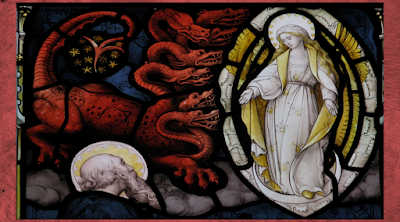 A "star" falls from the sky. This "star" is given "the key to the bottomless pit." The "star" then opens the bottomless pit. When this happens, "smoke [rises] from [the Abyss] like smoke from a gigantic furnace. The sun and sky are darkened by the smoke from the Abyss." From out of the smoke emerge locusts who are "given power like that of scorpions of the earth" and are commanded not to harm anyone or anything except for people who were not given the "seal of God" on their foreheads. The "locusts" are described as having a human appearance (faces and hair) but with lion's teeth, and wearing "breastplates of iron"; the sound of their wings resembles "the thundering of many horses and chariots rushing into battle."

The four angels bound to the great river Euphrates are released to prepare two hundred million horsemen. These armies kill a third of mankind by plagues of fire, smoke, and brimstone.

An angel appears, with one foot on the sea and one foot on the land, having an opened little scroll in his hand. Upon the cry of the angel, seven thunders utter mysteries and secrets that are not to be written down by John. John is instructed to eat the little scroll that happens to be sweet in his mouth, but bitter in his stomach, and to prophesy. John is given a measuring rod to measure the temple of God, the altar, and those who worship there. Outside the temple, at the court of the holy city, it is trod by the nations for forty-two months (3 1/2 years). And two witnesses prophesy for 1,260 days, clothed in sackcloth until they are killed by the beast and raised to life by God three days later for the whole world to see.

The temple of God opens in heaven, where the ark of His covenant can be seen. There is lightning, loud noises, thunder, an earthquake, and large hail.

Before coming to the seven bowls of wrath, the text introduces us to seven spiritual figures.

The Woman and Child:

She is "clothed with a white robe, with the sun at her back, with the moon under her feet, and on her head a crown of twelve stars." She is in labor with a male child.

The Dragon and Michael:

He has seven heads, ten horns, and seven crowns on his heads, and he drags a third of the stars of Heaven with his tail, and throws them to the Earth. The Dragon waits for the birth of the child so he can devour it. However, sometime after the child is born, he is caught up to God's throne while the Woman flees into the wilderness into her place prepared of God that they should feed her there for 1,260 days (3½ years). War breaks out in heaven between Michael and the Dragon, identified as that old Serpent, the Devil, or Satan. After a great fight, the Dragon and his angels are cast out of Heaven for good, followed by praises of victory for God's kingdom. The Dragon engages to persecute the Woman, but she is given aid to evade him. Her evasiveness enrages the Dragon, prompting him to wage war against the rest of her offspring, who keep the commandments of God and have the testimony of Jesus Christ.

He has seven heads, ten horns, and ten crowns on his horns and on his heads names of blasphemy. He emerges from the sea, having one mortally wounded head that is then healed. The people of the world are filled with wonder and follow the Beast. The Dragon grants him power and authority for forty-two months. The Beast of the Sea blasphemes God's name (along with God's tabernacle and His kingdom and all who dwell in Heaven), wages war against the Saints, and overcomes them.

Then, a Beast emerges from the Earth having two horns, a head like a lamb, a body as a sheep, a tail like a wolf, feet like a goat, and a speaking voice like a dragon. He directs people to make an image of the Beast of the Sea who was wounded yet lives, breathing life into it, and forcing all people to bear "the mark of the Beast", "666".

The Lamb/Son of Man (who introduce the events leading into the Third Woe):

The Lamb stands on Mount Zion with the 144,000 "first fruits" who are redeemed from Earth and victorious over the Beast and his mark and image. We then hear the proclamations of three angels, who say:

“Fear God and give him glory, because the hour of his judgment has come. Worship him who made the heavens, the earth, the sea and the springs of water.”

“‘Fallen! Fallen is Babylon the Great,’ which made all the nations drink the maddening wine of her adulteries.”

“If anyone worships the beast and its image and receives its mark on their forehead or on their hand, they, too, will drink the wine of God’s fury, which has been poured full strength into the cup of his wrath. They will be tormented with burning sulfur in the presence of the holy angels and of the Lamb. And the smoke of their torment will rise for ever and ever. There will be no rest day or night for those who worship the beast and its image, or for anyone who receives the mark of its name.”

Then “one like the Son of Man” reaps the earth. Another angel reaps "the vine of the Earth" and throws it into "the great winepress of the wrath of God... and blood came out of the winepress... up to one thousand six hundred stadia."

The temple of the tabernacle, in Heaven, is opened, beginning the "Seven Bowls" revelation. Seven angels are given a golden bowl, from the Four Living Creatures, that contains the seven last plagues bearing the wrath of God.