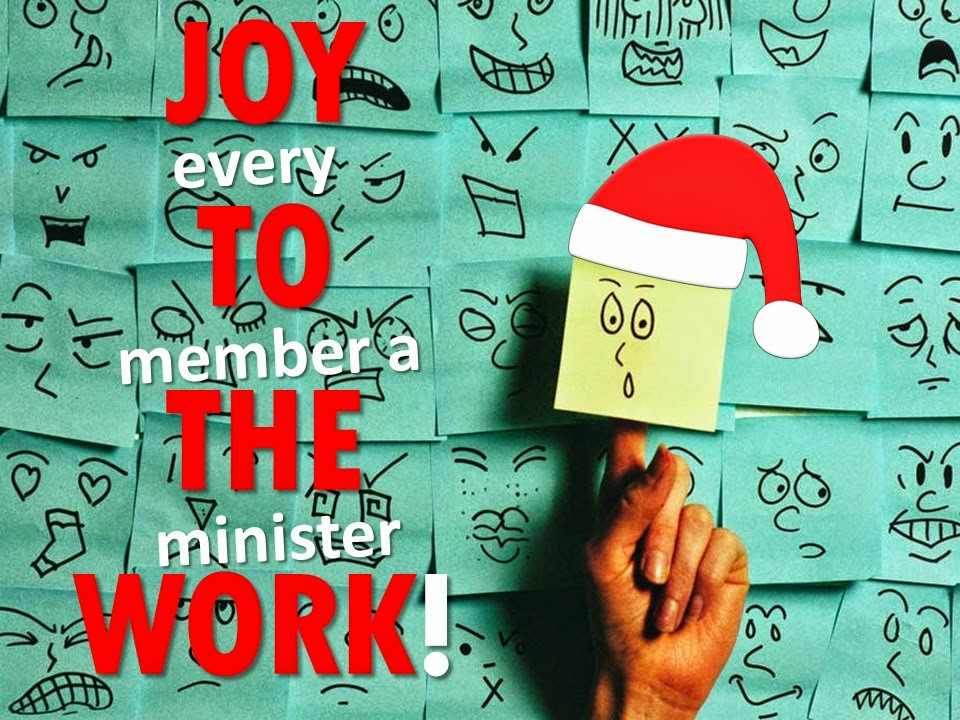 We've begun the "Joy to the Work" sermon series.  Let's review these verses together in preparation for tomorrow's sermon.

28 God blessed them and said to them, “Be fruitful and increase in number; fill the earth and subdue it. Rule over the fish in the sea and the birds in the sky and over every living creature that moves on the ground.”

15 The Lord God took the man and put him in the Garden of Eden to work it and take care of it.

35 Don’t you have a saying, ‘It’s still four months until harvest’? I tell you, open your eyes and look at the fields! They are ripe for harvest. 36 Even now the one who reaps draws a wage and harvests a crop for eternal life, so that the sower and the reaper may be glad together. 37 Thus the saying ‘One sows and another reaps’ is true. 38 I sent you to reap what you have not worked for. Others have done the hard work, and you have reaped the benefits of their labor.”

20 We are therefore Christ’s ambassadors, as though God were making his appeal through us. We implore you on Christ’s behalf: Be reconciled to God. 21 God made him who had no sin to be sin[a] for us, so that in him we might become the righteousness of God.

6 As God’s co-workers we urge you not to receive God’s grace in vain.

13 Once again Jesus went out beside the lake. A large crowd came to him, and he began to teach them. 14 As he walked along, he saw Levi son of Alphaeus sitting at the tax collector’s booth. “Follow me,” Jesus told him, and Levi got up and followed him.

17 On hearing this, Jesus said to them, “It is not the healthy who need a doctor, but the sick. I have not come to call the righteous, but sinners.”

5 One day as Jesus was standing by the Lake of Gennesaret, the people were crowding around him and listening to the word of God. 2 He saw at the water’s edge two boats, left there by the fishermen, who were washing their nets. 3 He got into one of the boats, the one belonging to Simon, and asked him to put out a little from shore. Then he sat down and taught the people from the boat.

4 When he had finished speaking, he said to Simon, “Put out into deep water, and let down the nets for a catch.”

5 Simon answered, “Master, we’ve worked hard all night and haven’t caught anything. But because you say so, I will let down the nets.”

6 When they had done so, they caught such a large number of fish that their nets began to break. 7 So they signaled their partners in the other boat to come and help them, and they came and filled both boats so full that they began to sink.

8 When Simon Peter saw this, he fell at Jesus’ knees and said, “Go away from me, Lord; I am a sinful man!” 9 For he and all his companions were astonished at the catch of fish they had taken, 10 and so were James and John, the sons of Zebedee, Simon’s partners.

Then Jesus said to Simon, “Don’t be afraid; from now on you will fish for people.” 11 So they pulled their boats up on shore, left everything and followed him.

Paul’s Rights as an Apostle

9 Am I not free? Am I not an apostle? Have I not seen Jesus our Lord? Are you not the result of my work in the Lord? 2 Even though I may not be an apostle to others, surely I am to you! For you are the seal of my apostleship in the Lord.

7 Who serves as a soldier at his own expense? Who plants a vineyard and does not eat its grapes? Who tends a flock and does not drink the milk? 8 Do I say this merely on human authority? Doesn’t the Law say the same thing? 9 For it is written in the Law of Moses: “Do not muzzle an ox while it is treading out the grain.” Is it about oxen that God is concerned? 10 Surely he says this for us, doesn’t he? Yes, this was written for us, because whoever plows and threshes should be able to do so in the hope of sharing in the harvest. 11 If we have sown spiritual seed among you, is it too much if we reap a material harvest from you? 12 If others have this right of support from you, shouldn’t we have it all the more?

But we did not use this right. On the contrary, we put up with anything rather than hinder the gospel of Christ.

15 But I have not used any of these rights. And I am not writing this in the hope that you will do such things for me, for I would rather die than allow anyone to deprive me of this boast. 16 For when I preach the gospel, I cannot boast, since I am compelled to preach. Woe to me if I do not preach the gospel! 17 If I preach voluntarily, I have a reward; if not voluntarily, I am simply discharging the trust committed to me. 18 What then is my reward? Just this: that in preaching the gospel I may offer it free of charge, and so not make full use of my rights as a preacher of the gospel.
Paul’s Use of His Freedom

The Need for Self-Discipline

24 Do you not know that in a race all the runners run, but only one gets the prize? Run in such a way as to get the prize. 25 Everyone who competes in the games goes into strict training. They do it to get a crown that will not last, but we do it to get a crown that will last forever. 26 Therefore I do not run like someone running aimlessly; I do not fight like a boxer beating the air. 27 No, I strike a blow to my bodyand make it my slave so that after I have preached to others, I myself will not be disqualified for the prize.

3 and because he was a tentmaker as they were, he stayed and worked with them.

22 set his seal of ownership on us, and put his Spirit in our hearts as a deposit, guaranteeing what is to come.

23 Not only so, but we ourselves, who have the firstfruits of the Spirit, groan inwardly as we wait eagerly for our adoption to sonship, the redemption of our bodies.

22 But the fruit of the Spirit is love, joy, peace, forbearance, kindness, goodness, faithfulness,23 gentleness and self-control. Against such things there is no law.

22 But the fruit of the Spirit is love, joy, peace, forbearance, kindness, goodness, faithfulness,23 gentleness and self-control. Against such things there is no law. 24 Those who belong to Christ Jesus have crucified the flesh with its passions and desires. 25 Since we live by the Spirit, let us keep in step with the Spirit. 26 Let us not become conceited, provoking and envying each other.
Posted by taryn at 3:00 AM

Email ThisBlogThis!Share to TwitterShare to FacebookShare to Pinterest
Labels: Joy to the Work, scripture, sermon series