Isaiah finishes off his series of six woe oracles that began in chapter twenty-eight.

Fifth Woe Oracle: Against the Women of Jerusalem

They are complacent women, thinking they stand secure.
Your merriment will be turned to mourning when this place is destroyed.
This place will become a wasteland forever until the Spirit is poured on us from on high.

Sixth Woe Oracle: Against the Destroyer

The LORD is a consuming fire who will destroy the destroyer and betray the betrayer.

The next section of the book foretells Zion’s deliverance. First, Isaiah pronounces God’s Judgment against the nations.

“Come near, you nations, and listen;
pay attention, you peoples!
Let the earth hear, and all that is in it,
the world, and all that comes out of it!
The Lord is angry with all nations;
his wrath is on all their armies.
He will totally destroy them,
he will give them over to slaughter.
Their slain will be thrown out,
their dead bodies will stink;
the mountains will be soaked with their blood.
All the stars in the sky will be dissolved
and the heavens rolled up like a scroll;
all the starry host will fall
like withered leaves from the vine,
like shriveled figs from the fig tree.” 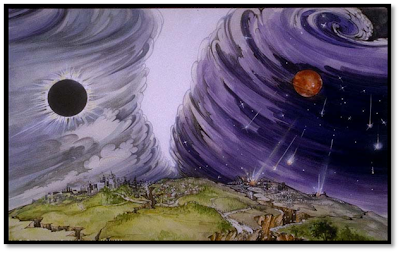 Isaiah then proclaims the joy of the redeemed. 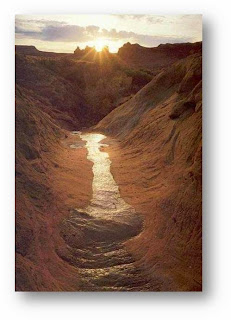 “Then will the eyes of the blind be opened
and the ears of the deaf unstopped.
Then will the lame leap like a deer,
and the mute tongue shout for joy.
Water will gush forth in the wilderness
and streams in the desert.
The burning sand will become a pool,
the thirsty ground bubbling springs.
In the haunts where jackals once lay,
grass and reeds and papyrus will grow.
And a highway will be there;
it will be called the Way of Holiness;
it will be for those who walk on that Way.”

“Gladness and joy will overtake them,
and sorrow and sighing will flee away.”

Chapters 36-39 are the same as 2nd Kings 18:17–20:21. This section retells almost verbatim the stories of Isaiah’s interaction with King Hezekiah.

King Sennacherib of Assyria sends troops to surround Jerusalem. The field commander called out to the people of Jerusalem: On what are you basing this confidence of yours? Pharaoh will not be able to save you from us. We will give you a good new land to live in if you surrender to us. Will Yahweh really protect you? Haven’t you been unfaithful to Yahweh? None of the gods of the other nations of the world were able to save their people from our might. Yahweh himself told us to march against Jerusalem and destroy it! Surely you will all eat your own dung and drink your own piss!

The people remained silent as Hezekiah had commanded them. Hezekiah puts on sackcloth and goes to the Temple. He sends for the prophet Isaiah, the son of Amoz. Hezekiah hoped that God would “rebuke” the Assyrians for their blasphemy and save Jerusalem.

“This is what the LORD says: Do not be afraid of what you have heard—those words with which the underlings of the king of Assyria have blasphemed me. Listen! When he hears a certain report, I will make him want to return to his own country, and there I will have him cut down with the sword.”

The Assyrians retreated because of threats of a Cushite invasion from the African continent. As they left, they sent a letter to King Hezekiah threatening that they would eventually come back and conquer Jerusalem and no one would be able to stop them.

“It is true that the Assyrians have destroyed the gods of other nations…because they were not really gods at all… Now, Lord our God, deliver us from his hand, so that all the kingdoms of the earth may know that you alone, Lord, are God.”

“‘Virgin Daughter Zion
despises you and mocks you.
Daughter Jerusalem
tosses her head as you flee.
Who is it you have ridiculed and blasphemed?
Against whom have you raised your voice
and lifted your eyes in pride?
Against the Holy One of Israel!
“Therefore this is what the Lord says concerning the king of Assyria:
“‘He will not enter this city
or shoot an arrow here.
He will not come before it with shield
or build a siege ramp against it.
By the way that he came he will return;
he will not enter this city,
declares the Lord.
I will defend this city and save it,
for my sake and for the sake of David my servant.’”

The angel of the LORD slaughters 185,000 Assyrian soldiers at night. Sennacherib returns to his capital at Nineveh. His two sons assassinate him. Esarhaddon becomes king of Assyria.

Hezekiah becomes deathly ill. Isaiah’s message: Get your house in order because you are going to die. Hezekiah faces the wall and cries and asks God to remember his faithfulness. Isaiah leaves, but God stops him, sends him back. Isaiah’s new message: God has heard you. God will heal you. God will protect this city from the Assyrians. Hezekiah asks for a sign from God. The sign was the shadow moving backwards up the steps instead of following its normal course down the steps during the day. Hezekiah then offers a song of praise to God.

Later, King Marduk-Baladan of Babylon is pleased when he learns that Hezekiah has recovered, and he sends envoys with gifts for him. Hezekiah shows off all of Jerusalem’s wealth to the envoys. Isaiah scolds him, and predicts the King of Babylon will one day come to plunder Jerusalem’s wealth. Hezekiah doesn’t care – he figures he’ll be long gone by then.