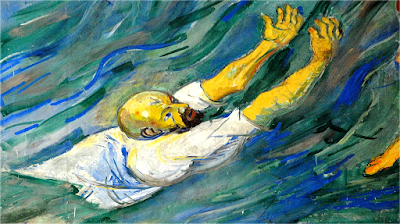 Jonah describes this experience of sinking in the sea and being swallowed by a fish as being swallowed up by “Sheol,” or death itself. But we learn that God is present even in Sheol.

Jonah’s Prayer to God is very similar to Psalm 139:

“In my distress I called to the Lord,
and he answered me.
From deep in the realm of the dead I called for help,
and you listened to my cry.
You hurled me into the depths,
into the very heart of the seas,
and the currents swirled about me;
all your waves and breakers
swept over me.
I said, ‘I have been banished
from your sight;
yet I will look again
toward your holy temple.’
The engulfing waters threatened me,
the deep surrounded me;
seaweed was wrapped around my head.
To the roots of the mountains I sank down;
the earth beneath barred me in forever.
But you, Lord my God,
brought my life up from the pit.
“When my life was ebbing away,
I remembered you, Lord,
and my prayer rose to you,
to your holy temple.
“Those who cling to worthless idols
turn away from God’s love for them.
But I, with shouts of grateful praise,
will sacrifice to you.
What I have vowed I will make good.
I will say, ‘Salvation comes from the Lord.’”

After three days, God causes the fish to vomit Jonah up onto dry ground… which is significant if the fish is a symbol of death itself.

Jesus refers back to this passage in the New Testament when the people demanded a sign form him:

"He answered, 'A wicked and adulterous generation asks for a sign! But none will be given it except the sign of the prophet Jonah. For as Jonah was three days and three nights in the belly of a huge fish, so the Son of Man will be three days and three nights in the heart of the earth. The men of Nineveh will stand up at the judgment with this generation and condemn it; for they repented at the preaching of Jonah, and now something greater than Jonah is here.'"
-- Matthew 12:39-41

God once again calls Jonah to go to Nineveh. Jonah goes this time and delivers almost a joke of sermon to them, with no real instruction… he just tells them that God will destroy them in 40 days.

But they believed him – and from the lowly to the high, all were repentant. The text says that even the cows repented and wore sackcloth and ashes.

Jonah sits outside Nineveh waiting for God to destroy the city... but nothing happens. Jonah wants some shade, so God causes a large vine to grow up over him. In the morning, God destroys the vine through a worm. Jonah freaks out, and starts whining and complaining and begging God to kill him. God asks him if he has any right to be angry, and Jonah says he does. He’s like, “I knew you would do this! I knew that you would be merciful and forgive them! That’s why I didn’t want to go! I wanted them to die! Kill me now! I’m better off dead than alive!”

"But the Lord said, 'You have been concerned about this plant, though you did not tend it or make it grow. It sprang up overnight and died overnight. And should I not have concern for the great city of Nineveh, in which there are more than a hundred and twenty thousand people who cannot tell their right hand from their left—and also many animals?'"