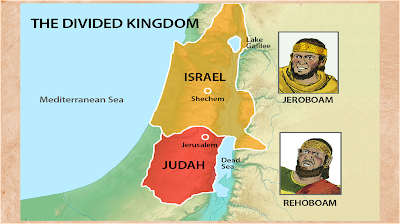 Jeroboam and all Israel asked Rehoboam to reduce the labor demands. He refused. Rehoboam still ruled Judah but Israel rebelled.

The LORD told Rehoboam not to attack Jeroboam. All the Levites came to Judah because Jeroboam set up idols. Rehoboam had sons.

Rehoboam was unfaithful to the LORD so Shishak attacked Jerusalem. Rehoboam humbled himself and the anger of the LORD turned away.

Abijah became king of Judah. He drew up battle lines against Jeroboam and said, "The LORD is our God". The LORD routed Jeroboam.

Asa became king. He did right in the sight of the LORD. Zerah the Ethiopian brought an army against Judah but the LORD routed them.

Azariah said to Asa, "The LORD is with you when you are with Him. Do not give up." The people made a covenant to seek the LORD.

Baasha fortified Ramah so Asa made a treaty with Ben-hadad. Hanani said, "You relied on Aram not the LORD." Asa became ill and died.