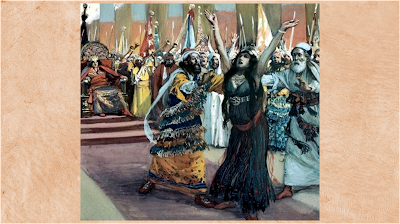 Jehoshaphat became king and was devoted to the LORD. He sent his officials to teach the law. He grew greater and built fortresses.

Ahab and Jehoshaphat planned for war. Micaiah said, "I saw Israel scattered. Your prophets are lying." Ahab was killed in battle.

Jehoshaphat returned to Jerusalem. He appointed judges and said to them, "Judge carefully, for with the LORD there is no injustice."

An army came against Jehoshaphat so he sought the LORD. Jahaziel said, "The battle is not yours but God's." The LORD set ambushes.

Jehoram ruled and did evil. Elijah wrote saying, "The LORD will send a plague." The LORD struck Jehoram with a disease and he died.

The people made Ahaziah king. He did evil and was killed by Jehu. Athaliah destroyed the royal family but Jehoshabeath hid Joash.

Jehoiada gathered the Levites and anointed the king's son as king. Athaliah was killed. The people tore down the temple of Baal.