READ IT! - Introduction to 1st Chronicles 1-5 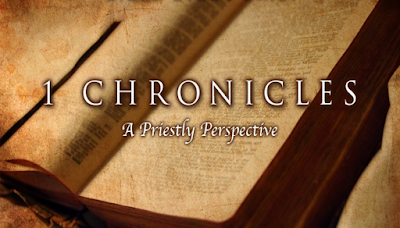 The Chronicles narrative begins with Adam and the story is then carried forward, almost entirely by genealogical lists, down to the founding of the first Kingdom of Israel (1 Chronicles 1–9). The bulk of the remainder of 1 Chronicles, after a brief account of Saul, is concerned with the reign of David (1 Chronicles 11–29).

Originally a single work, Chronicles was divided into two in the Septuagint, a Greek translation produced in the 3rd and 2nd centuries BC. It has three broad divisions:

Within this broad structure there are signs that the author has used various other devices to structure his work, notably through drawing parallels between David and Solomon (the first becomes king, establishes the worship of Israel's God in Jerusalem, and fights the wars that will enable the Temple to be built, then Solomon becomes king, builds and dedicates the Temple, and reaps the benefits of prosperity and peace).

The last events in Chronicles take place in the reign of Cyrus the Great, the Persian king who conquered Babylon in 539 BC; this sets the earliest possible date for the book. It was probably composed between 400–250 BC, with the period 350–300 BC the most likely. The latest person mentioned in Chronicles is Anani, an eighth-generation descendant of King Jehoiachin according to the Masoretic Text. Anani's birth would likely have been sometime between 425 and 400 BC. The Septuagint gives an additional five generations in the genealogy of Anani. For those scholars who side with the Septuagint's reading, Anani's likely date of birth is a century later.

Chronicles appears to be largely the work of a single individual, with some later additions and editing. The writer was probably male, probably a Levite (temple priest), and probably from Jerusalem. He was well-read, a skilled editor, and a sophisticated theologian. His intention was to use Israel's past to convey religious messages to his peers, the literary and political elite of Jerusalem in the time of the Achaemenid Empire.

Jewish and Christian tradition identified this author as the 5th century BC figure Ezra, who gives his name to the Book of Ezra; Ezra was also believed to be the author of both Chronicles and Ezra–Nehemiah, but later critical scholarship abandoned the identification with Ezra and called the anonymous author "the Chronicler". One of the most striking, although inconclusive, features of Chronicles is that its closing sentence is repeated as the opening of Ezra–Nehemiah. The latter half of the 20th century saw a radical reappraisal, and many now regard it as improbable that the author of Chronicles was also the author of the narrative portions of Ezra–Nehemiah.

The translators who created the Greek version of the Jewish Bible (the Septuagint) called this book "Things Left Out", indicating that they thought of it as a supplement to another work, probably Genesis-Kings, but the idea seems inappropriate, since much of Genesis-Kings has been copied almost without change. Some modern scholars proposed that Chronicles is a midrash, or traditional Jewish commentary, on Genesis-Kings, but again this is not entirely accurate since the author or authors do not comment on the older books so much as use them to create a new work. Recent suggestions have been that it was intended as a clarification of the history in Genesis-Kings, or a replacement or alternative for it.

The generally accepted message the author wished to give to his audience was this:

God is active in history, and especially the history of Israel. The faithfulness or sins of individual kings are immediately rewarded or punished by God. (This is in contrast to the theology of the Books of Kings, where the faithlessness of kings was punished on later generations through the Babylonian exile).

God calls Israel to a special relationship. The call begins with the genealogies (chapters 1–9 of 1 Chronicles), gradually narrowing the focus from all mankind to a single family, the Israelites, the descendants of Jacob. "True" Israel is those who continue to worship Yahweh at the Temple in Jerusalem, with the result that the history of the historical kingdom of Israel is almost completely ignored.

God chose David and his dynasty as the agents of his will. According to the author of Chronicles, the three great events of David's reign were his bringing the Ark of the Covenant to Jerusalem, his founding of an eternal royal dynasty, and his preparations for the construction of the Temple.

God chose the Temple in Jerusalem as the place where he should be worshiped. More time and space are spent on the construction of the Temple and its rituals of worship than on any other subject. By stressing the central role of the Temple in pre-exilic Judah, the author also stresses the importance of the newly-rebuilt Persian-era Second Temple to his own readers.

God remains active in Israel. The past is used to legitimize the author's present: this is seen most clearly in the detailed attention he gives to the Temple built by Solomon, but also in the genealogy and lineages, which connect his own generation to the distant past and thus make the claim that the present is a continuation of that past.

The book starts off with the genealogies, which start with the line from Noah, and the branches off with the descendants of Noah’s sons, Shem, Ham, and Japheth, and founders of the nations.

We then focus in on the family of Abraham, and the children he had through Hagar, Keturah, and Sarah. We then focus in on his son Isaac and Isaac's sons Edom (Esau) and Israel (Jacob). There is then a list of the Kings who ruled in Edom.

We then go back to Jacob (Israel) and his sons, starting with his fourth son Judah. Judah's line led to Obed, Jesse and David.

We also hear that Caleb was the son of Hezron (a descendant of Judah) whose firstborn son was Jerahmeel. And we learn that Caleb's line were the Kenites. Caleb’s relative Achar (or Achan) is also mentioned here as the one in the Book of Joshua who violated the devoted things and brought trouble on Israel.

We then jump back to King David whom we hear had six sons at Hebron, four by Bathshua (or Bathsheba) … and also nine others.

David’s son Solomon's line led to Jeconiah (or Jehoiakim) at the time of the exile to Babylon, and then later to the sons of Elioenai, who were of the royal line after the exile.

We then get more lists of the clans of Judah and were learn that Reaiah's sons were the Zorathites.

We then briefly hear about how God blessed a man named Jabez when he prayed to be blessed.

Also, we hear that Shelah's sons worked for the king.

We then move on to the Jacob’s third-born son, Simeon, and his descendants, and we hear that Simeon's line moved away to Gedor to seek pasture.

The book continues on with the genealogies, and we finally get to Jacob’s first-born son Reuben. We then hear about how Reuben lost his birthright, and how his sons lived in Gilead.

We also hear that the sons of Gad and the sons of Manasseh lived in Bashan until the captivity.