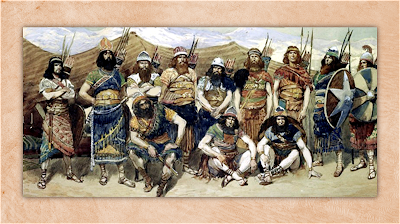 The book continues on with the genealogies, and we then get to Jacob’s third-born son, Levi. And we hear that Levi's sons were Gershon, Kohath and Merari. The famous musicians Heman and Asaph were also Levites. We hear how Aaron's sons made offerings, and that the Levites were given cities rather than broad swaths of land.

We then move on to the tribe of Issachar's whose numbers were 87,000.

We then move on to Benjamin, Jacob’s last son. Benjamin's sons were Bela, Beker and Jediael.

We then move on to Naphtali and the other half of Manasseh’s split tribe, before going to Ephraim’s clans, and we hear again that Ephraim's line led to Joshua.

We then move on to the tribe of Asher whose numbers were 26,000.

We then jump back to Benjamin, where we narrow in on the records of Saul, Israel’s first king. We hear that Benjamin was the father of Bela, Ashbel, Aharah, Nohah and Rapha. We then get a list of the clans of Benjamin, and we learn that from Ner's line was Kish, the father of Saul, the father of Jonathan. From Jonathan’s line came the sons of Ulam were known as mighty warriors.

We then learn that Jerusalem was resettled by Judah, Benjamin, Ephraim and Manasseh, and we are given a list of priests and Levite gatekeepers.

We then jump back again to the genealogy of Saul, son of Kish.

The narrative section of Chronicles begins here with the death of Saul. We learn that the Philistines fought Israel and Saul fell on his sword. The Israelites fled, and Saul died for his unfaithfulness against the LORD. These events are also recorded in 1st Samuel.

The elders anointed David king, and David conquered Jerusalem. He made Joab his general. We then hear about David's mighty men who included the three who brought him water from Bethlehem. Joab’s brother Abishai became their commander and killed three hundred men in battle. Another man named Benaiah killed a giant Egyptian and fought a lion in a pit on a snowy day.

We then learn that the Benjaminites and Gadites went over to David at Ziklag, and David made them officers. And more and more people kept coming over to join David until there was a great army.