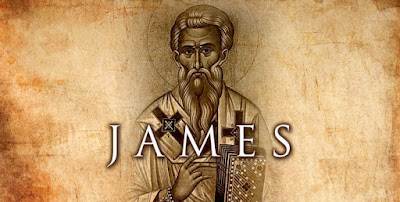 He then summarizes his main theme – the reward of faith. He starts with the issue of the prayer of faith, saying, “What causes fights and quarrels among you? Don’t they come from your desires that battle within you? You desire but do not have, so you kill. You covet but you cannot get what you want, so you quarrel and fight. You do not have because you do not ask God. When you ask, you do not receive, because you ask with wrong motives, that you may spend what you get on your pleasures.”

He then discusses the issue of friendship with the world, saying, “You adulterous people, don’t you know that friendship with the world means enmity against God? Therefore, anyone who chooses to be a friend of the world becomes an enemy of God. Or do you think Scripture says without reason that he jealously longs for the spirit he has caused to dwell in us? But he gives us more grace.”

And he quotes the Scriptures, saying:

“God opposes the proud
but shows favor to the humble.”

He then discusses the humility of faith, saying, “Submit yourselves to God. Resist the devil, and he will flee from you. Come near to God and he will come near to you. Wash your hands, you sinners, and purify your hearts, you double-minded. Grieve, mourn and wail. Change your laughter to mourning and your joy to gloom. Humble yourselves before the Lord, and he will lift you up.”

He then gets into some more specifics, starting with a call to avoid worldly influences. He starts by addressing the issue of slander in the community, saying, “Do not slander one another. Anyone who speaks against a brother or sister or judges them speaks against the law and judges it. When you judge the law, you are not keeping it, but sitting in judgment on it. There is only one Lawgiver and Judge, the one who is able to save and destroy. But you—who are you to judge your neighbor?”

He then addresses the issue of boasting about tomorrow, saying, “Now listen, you who say, ‘Today or tomorrow we will go to this or that city, spend a year there, carry on business and make money.’ Why, you do not even know what will happen tomorrow. What is your life? You are a mist that appears for a little while and then vanishes. Instead, you ought to say, ‘If it is the Lord’s will, we will live and do this or that.’ As it is, you boast in your arrogant schemes. All such boasting is evil.”

And he adds, “If anyone, then, knows the good they ought to do and doesn’t do it, it is sin for them.”

He then offers a warning to “wealthy oppressors”:

“Now listen, you rich people, weep and wail because of the misery that is coming on you. Your wealth has rotted, and moths have eaten your clothes. Your gold and silver are corroded. Their corrosion will testify against you and eat your flesh like fire. You have hoarded wealth in the last days. Look! The wages you failed to pay the workers who mowed your fields are crying out against you. The cries of the harvesters have reached the ears of the Lord Almighty. You have lived on earth in luxury and self-indulgence. You have fattened yourselves in the day of slaughter. You have condemned and murdered the innocent one, who was not opposing you.”

He then talks about the patience of faith, saying, “Be patient until the Lord’s coming. See how the farmer waits for the land to yield its valuable crop, patiently waiting for the autumn and spring rains. You too, be patient and stand firm, because the Lord’s coming is near. Don’t grumble against one another or you will be judged. The Judge is standing at the door!”

He then offers some biblical examples of patience in suffering, saying, “Take the prophets who spoke in the name of the Lord. As you know, we count as blessed those who have persevered. You have heard of Job’s perseverance and have seen what the Lord finally brought about. The Lord is full of compassion and mercy.”

And then he adds, “Above all, do not swear—not by heaven or by earth or by anything else. All you need to say is a simple ‘Yes’ or ‘No.’ Otherwise you will be condemned.”

He then discusses the prayer of faith, saying:

“Is anyone among you in trouble? Let them pray. Is anyone happy? Let them sing songs of praise. Is anyone among you sick? Let them call the elders of the church to pray over them and anoint them with oil in the name of the Lord. And the prayer offered in faith will make the sick person well; the Lord will raise them up. If they have sinned, they will be forgiven. Therefore confess your sins to each other and pray for each other so that you may be healed. The prayer of a righteous person is powerful and effective.

He gives a biblical example:

“Elijah was a human being, even as we are. He prayed earnestly that it would not rain, and it did not rain on the land for three and a half years. Again he prayed, and the heavens gave rain, and the earth produced its crops.”

And he concludes his letter by saying:

“If one of you should wander from the truth and someone should bring that person back, remember this: Whoever turns a sinner from the error of their way will save them from death and cover over a multitude of sins.”