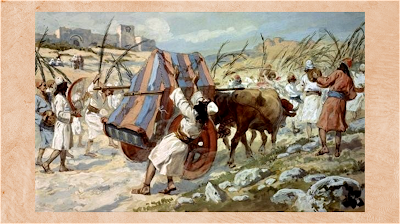 David said, "Let us bring the ark back." As they carried the ark Uzzah steadied it and was struck down by God. David was angry with God and he took the ark the home of Obed-Edom.

We then hear that David had more children. Also, the Philistines attacked again and David inquired of God and when he heard the sound of marching in the trees he defeated them.

David told the Levites to carry the ark. Heman, Asaph and Ethan were the musicians. The ark was brought into the city of David.

They made offerings and David appointed singers. "Give thanks to the LORD; He is greatly to be praised!" Asaph ministered each day.

The LORD said to Nathan, "Tell David: I will establish your house; your son will build my house." David prayed, "Who am I, O LORD?"

David defeated the Philistines, the Moabites, King Hadadezer, the Arameans and the Edomites. He reigned over Israel with justice.

The King of Ammon humiliated David's servants and hired the Arameans for war. Joab defeated them and David defeated King Hadadezer.