READ IT! - Introduction to 3rd John 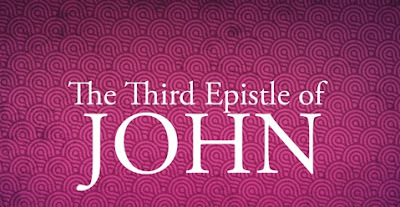 The Third Epistle of John is attributed to John the Evangelist, traditionally thought to be the author of the Gospel of John and the other two epistles of John. The Third Epistle of John is a private letter composed to a man named Gaius, recommending to him a group of Christians led by Demetrius, which had come to preach the gospel in the area where Gaius lived. The purpose of the letter is to encourage and strengthen Gaius, and to warn him against Diotrephes, who refuses to cooperate with the author of the letter.

Early church literature contains no mention of the epistle, with the first reference to it appearing in the middle of the third century. This lack of documentation, though likely due to the extreme brevity of the epistle, caused early church writers to doubt its authenticity until the early 5th century, when it was accepted into the canon along with the other two epistles of John. The language of 3rd John echoes that of the Gospel of John, which is conventionally dated to around AD 90, so the epistle was likely written near the end of the first century.

The letter begins with a salutation where “the elder” greets his “dear friend” Gaius, whom he “loves in the truth.” He says, “Dear friend, I pray that you may enjoy good health and that all may go well with you, even as your soul is getting along well.”

He then commends Gaius for his faithfulness, saying, “It gave me great joy when some believers came and testified about your faithfulness to the truth, telling how you continue to walk in it. I have no greater joy than to hear that my children are walking in the truth.”

He then commends Gaius for his hospitality, saying, “Dear friend, you are faithful in what you are doing for the brothers and sisters, even though they are strangers to you. They have told the church about your love. Please send them on their way in a manner that honors God. It was for the sake of the Name that they went out, receiving no help from the pagans. We ought therefore to show hospitality to such people so that we may work together for the truth.”

He then condemns Diotrephes, saying, “I wrote to the church, but Diotrephes, who loves to be first, will not welcome us. So when I come, I will call attention to what he is doing, spreading malicious nonsense about us. Not satisfied with that, he even refuses to welcome other believers. He also stops those who want to do so and puts them out of the church.”

He then gives his final greetings, saying, “I have much to write you, but I do not want to do so with pen and ink. I hope to see you soon, and we will talk face to face. Peace to you. The friends here send their greetings. Greet the friends there by name.”