READ IT! - Introduction to Revelation 1 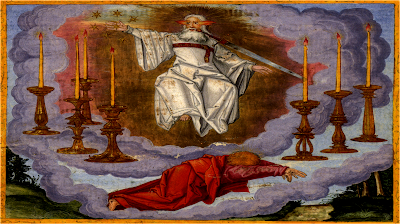 Was he John the Apostle? John the Presbyter (the “Elder”)? Some other John?

“If the author of Revelation was indeed one of the apostles, it would seem implausible that he would list the names of the apostles as a group distinct from himself. The Greek of the Gospel of John is simple, but grammatical. The Greek found in Revelation, however, is described by Raymond Brown as ‘the poorest in the [New Testament] to the point of being ungrammatical, which probably reflects one whose native language was Aramaic or Hebrew.’ Though inconclusive, these hints serve to show that the authorship of Revelation cannot be known with certainty. There is no way to verify whether John the Apostle, John the Presbyter, or some other unknown John was actually the author. The name "John" was, evidently, a common name among the early Christians. Therefore, possibilities abound.”

“The earliest external evidence for the date of Revelation is the statement from Irenaeus (c. A.D. 130-c.200) that the book was seen at the end of the reign of Domitian. Domitian was emperor from A.D. 81 to 96, so this account would suggest a date of authorship around A.D. 95-96. After the destruction of the Jerusalem Temple in A.D. 70 by Titus, ‘Babylon’ had become a symbolic name for Rome in Jewish literature. This symbolic association is used by the author of the epistle of First Peter as well. The designation originated, in part, due to it having been Babylon that had destroyed the first Jewish temple and Rome which had destroyed the second. The designation also associated the Rome of that day with the decadence, wealth, and great power of the Babylon of 600 B.C. This type of symbolic language implies that Revelation was written after the destruction of the Temple by Titus. A date after the Temple's destruction would also fit the description of the Temple in 11:2 where John writes that the temple's outer court has been ‘handed over to gentiles - they will trample on the holy city for forty-two months.’”

“Revelation affirms Christianity’s original hope for an immediate transformation of the world and assures the faithful that God’s prearranged plan, including the destruction of evil and the advent of Christ’s universal reign, is soon to be accomplished. The book presents an apokalypsis (unveiling) of unseen realities, both in heaven as it is now and on earth as it will be in the future. Placing governmental tyranny and Christian suffering in cosmic perspective, Revelation conveys its message of hope for believers in the cryptic language of metaphor and symbol.”

(1) The preterist approach believes that “Revelation is simply a sketch of the conditions of the empire in the first century.” Although one cannot divorce the interpretation of this book from its occasion this view cannot adequately handle all the data of Revelation, for the author makes plain that this work is a work describing the future.

(2) The historicist view (or continuous-historicist view) “contends that Revelation is a symbolic presentation of the entire course of the history of the church from the close of the first century to the end of time.”

(3) The futurist approach usually argues that “all of the visions from Revelation 4:1 to the end of the book are yet to be fulfilled in the period immediately preceding and following the second advent of Christ.” “The more literal an interpretation that one adopts, the more strongly will he be construed to be a futurist.”

(4) In the idealist approach, “the Revelation represents the eternal conflict of good and evil which persists in every age, although here it may have particular application to the period of the church.” But like the preterist view, this approach does not do justice to the predictive elements in the book.

John’s Numerical Symbols: The Mystical Number of the Beast

“Whoever this figure is, the author is certain that the first century recipients of his letter would be able to decipher his meaning. This would seem to go against current trends in popular theology, where it is asserted that the beast is an unknown future figure. The word ‘anti-christ’ nowhere appears in Revelation. In most surviving texts the number given is 666, but in both Greek and Hebrew manuscripts the number 616 appears instead. This variant was known to Irenaeus as early as the late second century. Many theories have been advanced, but it appears most probable that this number symbolizes the name of Nero. Before the use of Arab numerals, the letters of the Hebrew and Greek alphabets were also used as numbers, the value corresponding to the place in the alphabet. An example from English would be the letter A equaling the number 1, and so on. In this practice, by adding up the values of component letters that total the number of a person's name ‘the number of a human being’ is obtained. In Hebrew, the letters of ‘Neron Caesar’ add up to 666.”

“This is not the most common spelling of Caesar Nero's name, however, which can also be spelled without the final ‘n.’ In such a case, where the final ‘n’ is dropped, the name adds up to 616. Hence a possible explanation for the alternative rendering in the manuscript evidence. The evidence of the 616 number in the manuscript record at the very least allows for the possibility that in the understanding of some early Christian scribes, Nero was the implied figure.”

“In Revelation, the Nero legend is associated with the beast from the abyss and with the ‘eighth’ king who is at the same time ‘one of the seven’ emperors. The question immediately arises as to why Nero's name is being used if Domitian is the ruling emperor at the time of John's writing. The revived Nero legends all appear after the fall of the Jerusalem Temple in 70 C.E., giving further indication as to the time of Revelation's composition, and again, excluding Nero as the ruling emperor. Just as ‘Babylon’ was used by the early Christians as a pseudonym for Rome, it appears that ‘Nero’ was being used for Domitian. The historical Babylon had destroyed the first temple, just as Nero was the first emperor to brutally persecute the Christians. As the recipients of John's letter began to see themselves as the recipients of imperial persecution, it would have appeared to them that Nero had in fact been revived, if not physically, at least in spirit. This is not just an idea of the Christians, for both Juvenal and Pliny the Younger, both writing just after Domitian's reign, regarded Domitian as the second Nero. This explains how John could refer to the current emperor as the eighth, and yet at the same time as one of the previous seven: Domitian was Nero returned.”

The book begins with a prologue, starting with the author’s self-identification and the basis for his authority – divine revelation. The text is identified as a “revelation” of what “must soon take place.” The revelation was sent from God to Jesus to the angel to John to the churches.

The next part contains greetings and a doxology. The letter is addressed to the seven churches in the province of Asia. A blessing of grace and peace is given to the reader from “the one who was, and is, and is to come.” The “seven spirits before the throne” and Jesus Christ also send their blessings.

Jesus is identified as…

We then come to the doxology:

“Look, he is coming with the clouds,
and ‘every eye will see him,
even those who pierced him’;
and all peoples on earth ‘will mourn because of him.’
So shall it be! Amen.”

The next part of the book is John’s vision of Christ. Here, the writer identifies himself as John, and says that he, like others, has endured suffering for Jesus, and that he is on the island of Patmos because of the testimony of Jesus. He says that he was “in the Spirit” on “The Lord’s Day” when he heard a trumpet-like voice behind him telling him to write down what he saw and to send it to the seven churches. He then turned to see seven gold lamp stands, and a fiery man, bright as the sun, holding seven stars in his hand, and with a sword coming out of his mouth. John then faints and the man touches him and tells him not to be afraid. The man identifies himself, saying, “I am the First and the Last. I am the Living One; I was dead, and now look, I am alive for ever and ever! And I hold the keys of death and Hades.” The man then says that the seven stars represent seven “messengers” and the seven lamps represent the seven churches.