READ IT! - Introduction to Esther 1-3 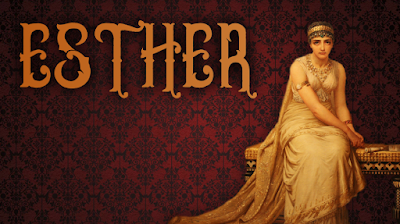 The story of Esther is set during the reign of Xerxes I (or Ahasuerus) in the period of Persian dominance over the world. Xerxes I was the king who battled the 300 Spartans. He also had a really bad temper. Once, as he was preparing to fight the Greeks, a flood came and washed away the bridge he had just built over the river. He had one of his slaves take a whip and strike the river with it hundreds of times as punishment for knocking down his bridge.

This book is the first book to refer to God’s people as “Jews.” This is because God’s people in this book were mainly made up of the people of Judah. Benjamin was also grouped in with Judah. Esther was from the tribe of Benjamin.

Xerxes held a big wild party for all of his nobles. He called for Queen Vashti to come out and strip-dance for him and his several hundred drinking buddies. She refused. His buddies told him that if he didn't punish her then all women in Persia would follow her example and disobey their husbands. They recommended Xerxes get a new queen and Xerxes agreed.

Xerxes needed a new queen, so all the virgin girls of the region were brought to his palace for a beauty contest. Enter Esther. She was a Jew. Her real name was Hadassah. She was raised by her older cousin Mordecai, who was a palace guard. Esther was prepped and pampered for a year and made it to the final round. Xerxes was stunned by her beauty and chose her to be his new queen. Esther kept her nationality a secret.

Two men named Teresh and Bigthan tried to assassinate King Xerxes. Mordecai learned of their plot and reported it to Esther, who reported it to the king. The two assassins were then executed, and for the time being Mordecai continued on with his normal palace duties.

The character of Haman is then introduced. He was the King’s second-in-command, and was an Agagite, a descendant of Agag. People bow to Haman as he rides through streets, but Mordecai refuses to bow. Haman holds a grudge against Mordecai and is filled with fury. He brags to his family about his own greatness, but he is depressed when he thinks of Mordecai’s defiance. Haman and his family plot to get revenge on all Jews, not just Mordecai.

Haman petitions Xerxes and tells him about a race of thugs out to assassinate him. Xerxes issues a decree granting the Persians permission to slaughter all the Jews in the area. The edict would go into effect on February 13th. Haman rolls dice to decide the date. And the edict is signed by the king with the irrevocable seal of the Medes and Persians.