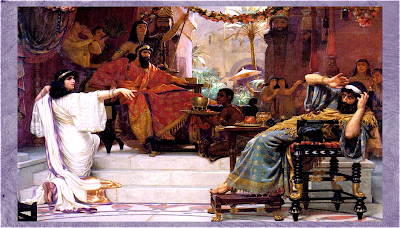 The Jews mourn over the edict. Mordecai sends a message to Esther, telling her to plead with the King to change his mind. His words echo Samuel’s words to Saul: If you don’t do what God has called you to do, God will punish you and replace you with someone willing. Esther and Saul were both from the tribe of Benjamin. Mordecai tells her “Perhaps you were born for such a time as this.”

Esther appears before Xerxes uninvited. The death-penalty was the usual punishment for this act. But Xerxes extends his golden scepter towards her, as a sign of protection. Esther invites Xerxes and Haman to a dinner party that night. Xerxes and Haman are pleased to be honored by the queen. After dinner, Esther invites them both back again tomorrow night for another dinner party.

Haman leaves in good spirits, but he passes Mordecai on his way home and becomes angry again. He decides he cannot wait until the edict goes into effect, and he goes back to the palace to get the King’s permission to kill Mordecai early. And he tells his servants to construct a pole 50 cubits high on which to impale Mordecai.

Xerxes is listening to scribes read the royal records to help him sleep. He reads about Mordecai saving his life, and he wonders why Mordecai was never rewarded. Xerxes notices Haman standing outside, and sends him in. Xerxes cuts Haman short, and asks him how to go about honoring somebody special. Haman thinks the king is talking about him, so he says it would be a good idea to dress this man in royal robes, put a crown on his head, have a prince put him on a royal horse and march him through the streets proclaiming, “This is how the King treats those who please him!” Xerxes agrees, and tells Haman to do all that for Mordecai. Xerxes chooses Haman to be the prince leading Mordecai’s parade.

After the parade, Haman arrives at the second dinner party. Esther’s declares that she and her people “have been sold to be destroyed” … by “this vile Haman!” Xerxes is shocked, and he goes out to the garden to think. Haman falls upon Esther, begging for mercy. Xerxes returns, sees what appears to be Haman attacking his Queen, and orders the guards to grab Haman. A servant suddenly reports that the pole that Haman asked them to prepare for Mordecai is now built, and so Xerxes impales Haman on it, and also kills Haman’s family.

Esther asks Xerxes to repeal the edict of genocide against her people. Xerxes instead makes a new edict which provides all Jews with weapons to defend themselves and gives them special permission to execute any of their enemies in the land.

On February 13th the edict goes into effect, and the Jews slaughter all of their enemies who had conspired against them. Many people from other nationalities decide to become Jews themselves before this takes place.

On the day of this battle, the Jews were saved from destruction, and established a new festival to be celebrated on February 14th and 15th. This festival came to be known as “Purim” and is still celebrated today.

In the end, Haman was impaled on the pole prepared for Mordecai, and Mordecai was promoted to the job that had been prepared for Haman.