READ IT! - Introduction to Paul’s Letter to Philemon 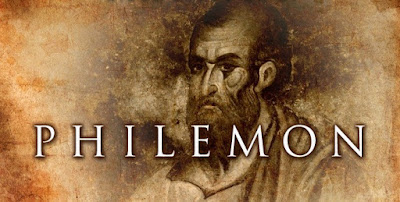 Date and place of composition:

To reconcile Philemon with one of his slaves, Onesimus, and perhaps to secure Onesimus’s services for himself.

Contemporary readers are typically shocked that Paul, who had proclaimed the essential equality of all believers united in Christ (Gal. 3:28), does not use this occasion to denounce the institution of slavery as totally incompatible with Christian faith. Although Paul does not condemn the practice of buying and selling human beings – probably because he believes that the Greco-Roman world order will soon end – he does argue persuasively for a new relationship between master and slave. He asks the slave-owner, Philemon, to accept his runaway slave, Onesimus, as a “beloved brother,” thereby establishing a new bond of kinship humanely linking Christian owners and their slaves.

The letter begins with a salutation and claims to be written by Paul and Timothy. They present greetings to their friend Philemon, sister Apphia, Archippus the soldier, and the church that meets in their home. A blessing of grace and peace is given.


Paul says he thanks God because he’s heard about their love for God’s people and their faith in Jesus. He says he prays that their partnership will be effective and that their understanding of the good they share in Christ will be deepened. He says their love has given him great joy and encouragement and they have refreshed the hearts of the Lord’s people.

Paul then appeals to Philemon in love even though he feels he has the right to order Philemon what to do here. Paul refers to himself as an old man and as a prisoner for Christ. He appeals on behalf of Onesimus who had become Paul’s helper while he was in chains. He admits that he was formerly useless to Philemon, but now he has become useful both to Philemon and to me Paul.

Paul says he is sending Onesimus back to Philemon and he calls Onesimus his “very heart.” Paul says he would have liked to have kept Onesimus around as he had been very helpful to Paul in Philemon’s absence. But he wanted to make sure he wasn’t forcing Philemon into doing anything that wasn’t voluntary. Paul says that maybe the reason Philemon and Onesimus were separated for a time was so that they might be reunited again – but not as master and slave, but as brothers in Christ.

Paul says, “So if you consider me a partner, welcome him as you would welcome me. If he has done you any wrong or owes you anything, charge it to me.”

Paul writes out an agreement saying he will repay anything Onesimus may owe to Philemon, but points out that Philemon already owes Paul “his very life.” Paul tells Philemon he is confident he will be obedient and do even more than what he is asking of him.

Paul then gives his final greetings, and also gives greetings from Epaphras (whom he refers to as his fellow prisoner in Christ Jesus), Mark, Aristarchus, Demas, and Luke.

And he blesses them, saying, “The grace of the Lord Jesus Christ be with your spirit.”