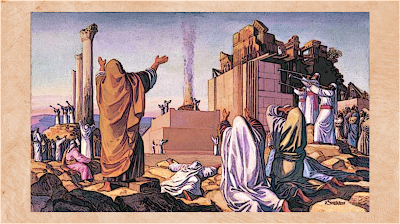 The prophets Haggai and Zechariah tell the people to rebuild God’s House. And so Joshua and Zerubbabel restart reconstruction.

But Governor Tattenai of Trans-Euphrates tattles on them to Darius the Great. And so Darius the Great looks into the law records of Cyrus, seeing his former decree to rebuild the Temple, and he decides to give his blessing to the Jews as well.

The Jerusalem Temple is rebuilt over next four years, and once completed the people celebrate Passover again.

But there’s some opposition to the rebuilding. Their enemies send threats and attempt sabotage, and even petition King Xerxes I. They later petition Artaxerxes, who orders the construction to halt.

Eventually, in another wave of resettlement, Ezra arrives in Jerusalem. Ezra is a scribe and a teacher and is sent by Darius the Great in order to instruct the people in God’s laws. He is entrusted with silver and gold for the Temple, and he returns some of the Holy Items to the Temple that had been plundered by Nebuchadnezzar. He also recruits Levites to serve in the Temple.

And, strangely enough, Darius the Great threatens the Jews with death, banishment, or confiscation of property if they do not follow the laws of their God.

At the end of Ezra’s book we see an intermarriage dilemma take place. Ezra sees that many Jews married pagan wives, and their children knew nothing of God, and so Ezra accuses the people of their sin. The people confess, and the men end up divorcing their wives. Interestingly, the book of Ruth, a story about King David’s great grandmother, a Moabite, began to become a popular book among the people at this time.